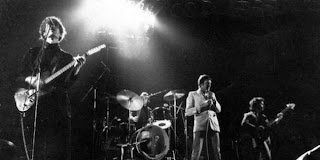 I've often said that "stadium rock" crap of the mid 70's spawned punk rock. I'd like to think it also spawned "pub rock", a U.K. mid 70's phenomena that incorporated a low rent, no nonsense gang of r&b loving musos who played in pubs to smaller audiences. No one better exemplifies this description than Canvey Island's Dr. Feelgood. Led by lead singer /gob iron blower Lee Brilleaux and lead string bender Wilko Johnson (who played in the choppy style of the legendary Mick Green of The Pirates), "the Feelgoods" (as they were known to fans) were balls up rock n' roll that didn't need 20 minute guitar solos, or lasers, blow in the back of your Roller or champagne and caviar. Their debut LP 1974's "Down By The Jetty" was all about stale pints of bitter, John Lee Hooker 45's, beat up guitars and crisp sharp r&b purists keeping it short, simple and (in today's vernacular) real. All in that order. One listen to "Down By the Jetty" and its opening cut "She Does It Right" and you can hear where the licks and choppy chord patterns at breakneck speed on The Jam's first two LP's came from. Their next LP, 1975's "Malpractice" follows the same seamless r&b non stop party formula with originals lodged in between covers. Their third LP, 1976's "Stupidity" was recorded live gives us an idea what the band were capable of outside the studio. Wilko Johnson moved on and was replaced by Gypie Mayo. Gypie played on the band's only UK top ten hit, "Milk And Alcohol" a rocking tale about going to see a gig by washed up, half dead r&b star. In my estimation its one of the better post Wilco Feelgoods #'s (along with "As Long As The Price Is Right", which was my first exposure to the band in the 80's).  Which leads us to a bit of their impact on me... 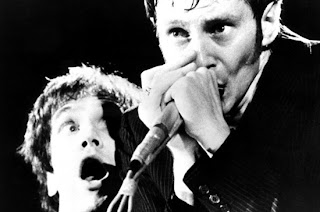 Wilco and Lee in full steam.
My first introduction to them came in 1983 or 1984 when I'd read about them in a Jam book ("A Beat Concerto") that I'd just purchased at a local record shop (The Record Setter on Rt. 18 in East Brunswick, NJ).  I went back to the same shop and bought the above mentioned single for 49 cents (on purple vinyl nonetheless).  In the early 90's my friend Kevin Power (on recommendation from our mutual friend John Jorgensen) purchased the Edsel LP reissue of "Down By The Jetty" and played it for me.  The first few seconds of "She Does It Right" blew my mind.  There was no question where that first Jam LP came from.....the rest as they say, is history.

For anybody who's as Feelgood's mad as me Julien Temple has put together a documentary on the lads titled "Oil City Confidential".  Though it never reached the theaters here in the States it can be yours on DVD from Amazon.co.uk.  That is provided you've got a multi region DVD player or if you don't you can go here and get codes to "hack" yours into a multi region player like I did with mine two years ago: 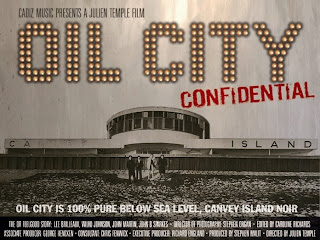