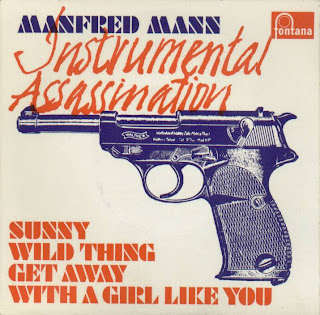 MANFRED MANN-Instrumental Assassination E.P.: Side One: Sunny/Wild Thing Side Two: Get Away/With A Girl Like You U.K. Fontana TE 17483 1967
As previously discussed in our May 28, 2009 installment, Manfred Mann were no strangers to jazz and as we discussed in that date's posting on they'd already released "Instrumental Asylum" (U.K. HMV 7EG 8949) an E.P. with jazzy versions of four current pop hits.   With a switch from HMV to Fontana in August of 1966 AND a new lead singer (former Band of Angels lead singer Mike D'Abo who replaced Paul Jones) the Manfred's had seen their share of personnel shuffling.
In December 1966 they released a second E.P. of jazz styled interpretations of the top forty called "Instrumental Assassination".   The line up for the E.P. comprised of Manfred Mann on keyboards, Mike Hugg on drums/vibes, Tom McGuinness on guitar, Dave Richmond on double bass, and strangely, new bassist Klaus Voorman on recorder.  Presumably this was an "in" joke and also presumably because the E.P. was perhaps recorded before Voorman had joined?  I'm a little unclear on that one. Housed in a stylish E.P. sleeve bearing an image of a Walther P-38 pistol in a bold font it's eye catching.
Bobby Hebb's "Sunny" (also a sizable hit for Georgie Fame in the U.K. in September 1966) is first on the chopping block. It's sloppy and sounds like a bunch of the guys went to the pub, got pissed, came back and cut a half hearted jazz version of "Sunny" accented by some slightly off key shouting the chorus in unison.  Next.  Their label mates Trogg's "Wild Thing" is next, it's interesting because Manfred utilizes a Mellotron which gives it a more "way out" feel.  Side Two's "reading" of Georgie Fame's U.K. #1 "Getaway" is my fave of the lot.  It starts out with a voice chanting "Getaway" deep enough to sound like a bullfrog croaking and moves swiftly into a swinging vibes led groover with some excellent drumming by Mike Hugg and some nice Hammond complementing the vibes.  The Troggs are again the subject (odd how the E.P. is essentially two Troggs and two Georgie Fame hits!), this time it's "With A Girl Like You".  It begins with a sawing double bass and progresses into a descending military march where each instrumental (guitar, vibes etc) all come in one at a time.  It doesn't get as swinging as "Getaway" but it's still quite interesting, of course slightly marred by the drunken sounding "vocals" (luckily away from the mikes) and every time you think the number is about to end the military march drumbeat resurrects it! 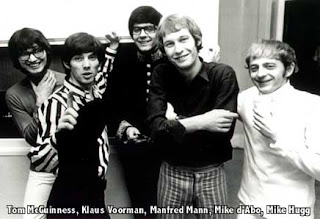