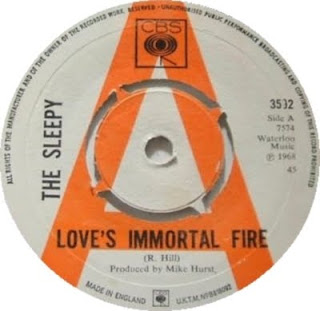 THE SLEEPY-Love's Immortal Fire U.K. CBS 3532 1968
Every now and then you come upon a record by a band you've never heard of and the song just blows your mind you find yourself thinking "how come I've never heard this or how come nobody I know has ever turned me onto this?".   A number of years ago my then girlfriend and I hit Rockit Scientist in NYC (NYC's grooviest CD/vinyl emporium) and I bought this CD compilation of U.K. 60's tracks in a D.I.Y. series called "Jagged Time Lapse" and several glasses of red wine later we were playing this track over and over.  In fact thanks to it's brilliance (and perhaps the wine) decided to skip going back into NYC to attend "Smashed Blocked" and just stay in and continue to groove on this tune.

Years later I'm no closer to knowing who they were or what their story is, but I'm still blown away by this record.  It's got all my favorite mid/late 60's ingredients: flute, a groovy Hammond organ, vocals by a guy who sounds suitably stoned and "mellow", man. The groove it lays down is down right infectious. It's like some song from an imaginary 60's Swinging London film I came up with in my head years ago while being nice, only better. It's good to know that after 25+ years of "Rubble", "Chocolate Soup" and "Electric Sugarcube Flashbacks" there are still a great deal of amazing British psych records like this that have yet to be comped!

Hear it for yourself and be forever changed: