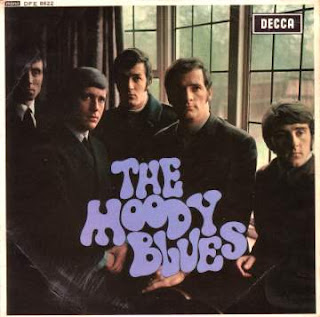 This May 1965 offering is an interesting E.P. as it features three previous Moodies "A" sides, their debut single "Steal Your Heart Away" and it's flip,  "Lose Your Money" (Decca F 11971 September 1964), their #1 smash "Go Now" (Decca F 12022 November 1964) and their previous single "I Don't Want To Go On Without You" (Decca F 12095 February 1965).  Usually British 60's E.P.'s either carried two singles (A's & B sides) or four non-LP/non-45 tracks.  This is sort of an oddity as it contains three previous A-sides, two of which failed to register much of a chart impact!  Curious stuff.  The sleeve photo is yet another classic example of brilliance from Decca's in house lensman David Wedgbury.

All four tracks are available as bonus tracks on the various CD reissues of their debut LP "The Magnificent Moodies" .
By Wilthomer - July 28, 2010