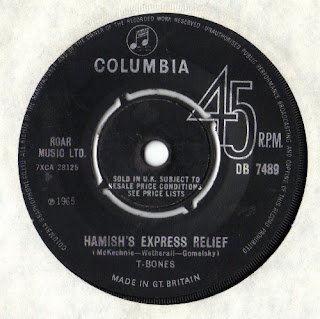 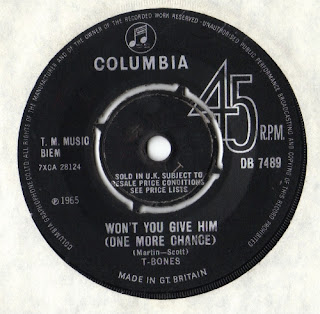 Gary Farr & The T-Bones were one of those unsung British 60's bands who had all the right contacts but never got to the big time.  Gary was the brother of Ricky Farr who managed The Action and had been spotted gigging in Brighton (their stomping ground with fellow South Coast r&b'ers The Untamed) in 1964 by Giorgio Gomelsky's associate Hamish Grimes (announcer on the legendary "Five Live Yardbirds" LP).  This led to Gomelsky signing them up (having lost The Rolling Stones and about to lose The Yardbirds) and their appearing at all the famous London r&b night spots. The band's line up included at this time, Farr on lead vocals, Winston B. Whetherall on lead guitar, Andy McKechnie on rhythm guitar, Stu Parks on bass and Andy Steele on drums (later to leave the band for The Herd after the recording of this 45 and replaced by Brian "Legs" Walkley).

The 45, for reasons unknown, as was the case with their previous 45 ("How Many More Times" b/w "I'm A Lover Not A Fighter" U.K. Columbia DB 7401) was released under the moniker "The T-Bones". Subsequent releases, (an E.P. and another 45 would be credited to "Gary Farr & The T-Bones perhaps to avoid confusion with the American band of  "No Matter What Shape Your Stomach's In" fame). 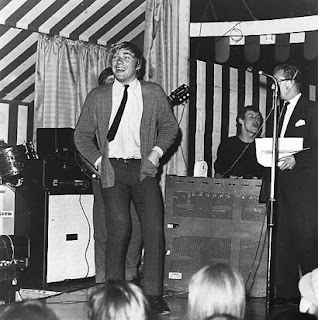 Gary Farr at the Marquee Club 1965

Like many other U.K. 60's r&b records today's single in question has a killer on one side and a number of the other side that makes you wonder "What WERE they thinking?".  No doubt this was something well beyond the control of the band and either their A&R man's decision or that of their producer or even manager.  "Won't You Give Him Just One More Chance" was recorded by Tom Jones and issued on his "What's New Pussycat" LP and was far more suited with his "beat ballad" style than that of Crawdaddy club night ravers like Gary Farr & Co.  Luckily the hardcore r&b band is allowed to shine through on the B-side with "Hamish's Express Relief", an instrumental led by wailing harmonica, some frenzied shouts and the breaks and frantic playing by all concerning (especially the inclusion of one of the trademark British r&sounds, the zooming bass).

A plug on the famous television show "Ready! Steady! Go!" notwithstanding the record flopped. Like his Gomelsky stablemates Brian Auger and The Yardbirds, there are loads of dodgy Gary Farr LP comps out there with these tracks and there's a collection of all of his 60's output from the r&b era (some of dubious quality) available from iTunes for download including both of these tracks. 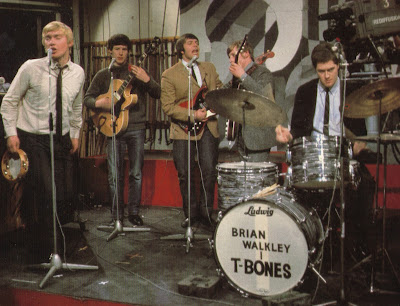 Hear "Won't  You Give Him One More Chance":

Did their version of "Wooly Bully" that they did live @ Shindig In London make it on 45?

Sadly it did not: