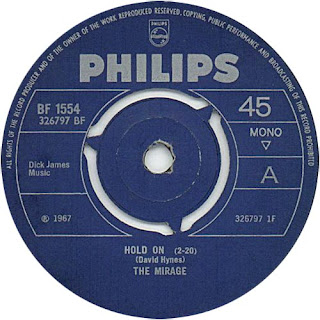 THE MIRAGE-Hold On/Can You Hear Me U.K. Phillips BF 1554 1967
By the Spring of 1967 you'd think that psychedelia had washed over the music scene on the British Isles with it's big wide technicolor paintbrush, not so for a few records. This is one of them.
Essentially The Mirage were one of your typical moddy, soul loving British 60's groups who never seemed entirely convincing at psychedelia.  Take their previous single (Phillips BF 1534 from December '66) an ill advised cover of the Fab's "Tomorrow Never Knows" backed with the rocking "You Can't Be Serious", a number that sounds like the missing link between The Just Four Men and Wimple Winch.  Luckily the band held off on any more Beatles covers and in March of '67 released "Hold On"(not be be confused with the later Rupert's People/Sharon Tandy number of the same name).  It's a brilliant mod/go-go type groover with some great hooks and catchy vocals (esp. the chorus that utilizes the phrase "go go" as often as possible) that's like a discotheque strobe light effect flitting back and forth.  There's some searing guitar work and a pseudo "Taxman" style beat behind it all.  Easily their best. "Can You Hear Me" is thoroughly out of place.  It's dead boring after the adrenaline mod/soulfulness of "Hold On", like The Ivy League at their lamest.  What WERE they thinking?!  The band went on to cut one more single for Phillips (the pop-sike amazingness that is "The Wedding Of Ramona Blair") before moving to Page One for some dreadfully boring stuff in 1968.

Both tracks are collected on the CD compilation of the bands Phillips era material "You Can't Be Serious".
Hear both sides of the record:
By Wilthomer - January 21, 2011

Email ThisBlogThis!Share to TwitterShare to FacebookShare to Pinterest
Labels: The Mirage mod freakbeat