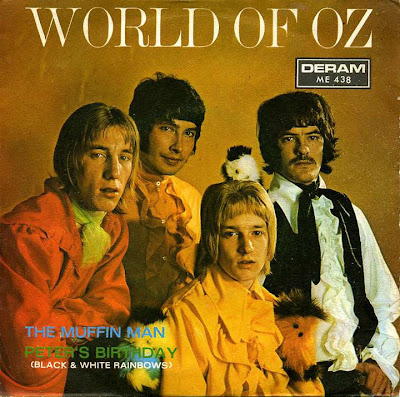 This was the first of three singles by a archetype Deram pop sike group World Of Oz who exemplified the "psychedelic pop" moniker.  Produced by Deram's maestro Wayne Bickerton with musical direction by the mighty Mike Vickers it's a perfect debut.

"Muffin Man" is a typically whimsical British slice of pop psychedelia that relies on strings, cheeky lyrics and a happy go lucky feel that typifies everything you'd expect from the 60's English psychedelia of Lewis Carroll, fairies, elves, teas with teddy bears etc.  Despite all that it actually works despite what may be perceived as soppy from my saccharine description. "(Black & White Rainbows) Peter's Birthday" though musically following the same formula as the A-side is lyrically more dark and sinister as it seems (to me anyway) about a child's nightmare.

The single was released in the U.K. as Deram DM 187 and garnered releases in the US, France, Germany Holland and in the focus of today's issue Spain (all but the US issue came in picture sleeves).

"Muffin Man" appeared on the now out of print See For Miles CD "The Great British Psychedelic Trip Volume One" and "(Black & White Rainbows) Peter's Birthday" appeared on "Rubble Volume Twelve: Staircase To Nowhere"  which can be found in the "Rubble Two" box set as well as See For Mile's also out of print "Psychedalia: Rare Blooms From The English Summer Of Love" CD comp.  Fortunately both tracks can be found on the in print CD reissue of their untitled 1969 LP (which originally included "Muffin Man" as one of the album's tracks but not the flipside). 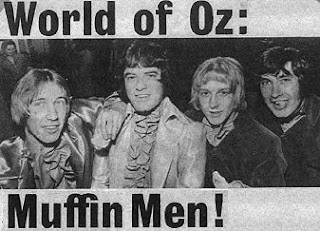