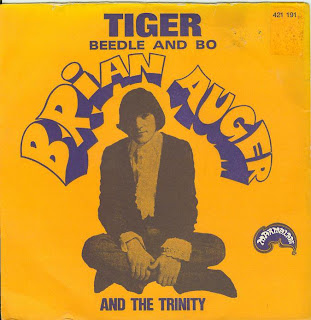 Coming to you live from snowbound Lower Binfield, Flatland where a 14 month old is incessantly attempting to click on my mouse....

I've heard/read some folks criticize his voice, but when you can pump the B-3 like Brian Auger it doesn't matter what your voice sounds like, and besides it sounds fine to me!  Brian's got a nice bit of material out there from before and during his musical journeyman ship with the Steampacket and as "Julie Driscoll , Brian Auger and The Trinity", this is my fave of the lot and the first thing I'd ever heard or dug by him (via a dodgy compilation LP of his and Jools pre-Trinity "solo" stuff). This was his third "solo" single and it was released in March of '67 shortly before his first formal 45 release with Julie Driscoll and The Trinity.

"Tiger" is my fave Brian Auger Trinity record hands down.  From it's punchy horn infected main riff to Julie Driscoll's backing vocals cooing along (or so I think it's Jools?) with it and of course Auger's brilliant Jimmy Smith style Hammond trills and the randy chorus:

it's an amazing track. The flip side was originally titled "Oh Baby Won't You Come Back Home To Croydon Where Everybody Beedle's And Bo's" for it's British release, obviously the French thought better and abbreviated it a bit!   The number is a bit of a laugh with Brian Auger singing in alternating accented voices while he name checks various London "in" night spots and their various deficiencies, imploring as the title says that you come back to Croydon where everybody......it's quite jazzy and musically reminiscent of his earlier U.K. singles ("Foolkiller"/"Let's Do It Tonight" and "Green Onion'65"/"Kiko").

Sadly Brian Auger's back catalog has been horribly mismanaged and abused at the hand of Giorgio Gomelsky (or someone else I'm not sure who) because these tracks have appeared on too many LP's and even a few CD's of very dodgy repute.  They've turned up on a few CD's I've seen, notably "Get Auger-zed" and "The Mod Years", which I think are all properly licensed and therefore sound better, I'd imagine but I don't own either so I can't say for sure.  But I believe both of these are long out of print.