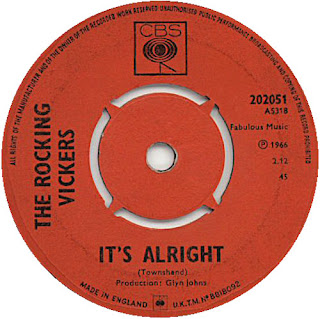 The Rocking Vickers would've been just another over looked 60's beat group if they hadn't been joined midway through their career by one Ian "Lemmy" Kilmister on guitar.

March 1966's "It's Alright", their second U.K. single is their finest moment.  Listeners will notice a distinct similarity to The Who's "The Kids Are Alright" (which appeared on their debut LP "My Generation" in December of 1965).  For years I wondered if this track had been a precursor to "The Kids Are Alright" as it bore Townshend's songwriting credits but in his autobiography "White Line Fever" Lemmy admitted to freely nicking the melody/lyrics and crediting Townshend just to be on the safe side.  Regardless of it's originality it's an amazing track from it's power chords to it's distorted Dave Davie's type guitar solo/riffs, Nicky Hopkin's style piano tinkling and manic drumming c/o the band's legendary Cyril "Ciggy" Shaw.  Shaw's "Stay By Me" on the B-side is far different. It's not bad but it's from an earlier time in music where beat groups hadn't yet been overtaken by guys in bright clothes playing guitars really loud and speed fueled drummers going apesh*t on their kits with it's crooning vocals and volume pedal infused guitar bits it's decidedly dated for 1966.

The band went on to cut one more single, a cover of Ray Davie's "Dandy" b/w the garagey "I Don't Need Your Kind" (more on that one another day I promise) and like most unsung British 60's bands managed to become popular in a far flung place: Finland, prompting several dates there and a Finnish only single release.

Both sides were collected on the RPM Rockin' Vickers CD compilation "Lifelines:The Complete Rocking Vickers"  and "It's Alright" has appeared on the "That Driving Beat Volume 4" and "The In Crowd Volume One:U.K. Mod R&B/Beat 1964-1967" CD's. 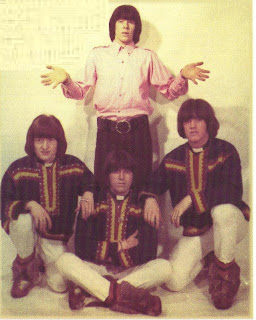 The Rockin' Vickers in traditional Finnish costume
acquired while on tour there, Lemmy on the right.
By Wilthomer - January 17, 2011

Ah yes Lemmy. Lovely bloke. Treats women as people, which is still a rarity in his genre of choice these days.

Would very likely be on at least a long list for the pub conversation, only the pint of choice would most likely be JD.