We Shall Have No Psychedelia On The Village Green! 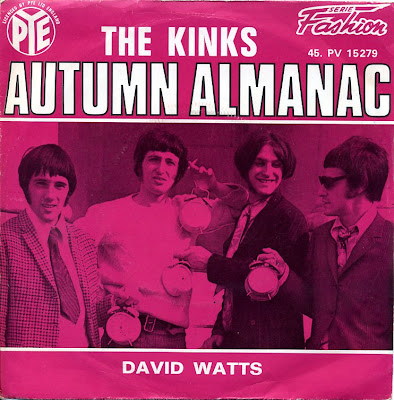 One of the things I've always loved about the Kinks is that in the 60's they were much like Ray Davie's proverbial/fictional Village Green untouched by time, the antithesis of the village in Orwell's "Coming Up For Air" where our hen pecked traveling salesman protagonist returns to find the quaint village of his youth changed by the hand of progress and time.  In the post beat-era 60's The Kinks to seemed untouched by time to a degree, sure they weren't knocking out their same raw four chord ravers like they did in '64-'65 but they'd still kept to their own agenda.  For one thing, psychedelia did not envelop The Kinks and save possibly, "Lazy Old Sun" on their 1967 "Something Else.." album the band never flirted with the technicolor wave that washed through 1967 Britain changing music and minds alike.

"Autumn Almanac" conjures, again, the quintessential Kinks era that's encapsulated in a time that perhaps  "never was" as perfectly illustrated the following year in their classic "Kinks Are The Village Green Preservation Society" LP (in December's issue of "Uncut" Ray Davies said of the "Village Green..." LP: "I was 24 when I wrote that it. That England was evaporating when I was born."). There's something incredibly cheery and cheeky about it, maybe it's the knees up/music hall sing-a;long feel of it with it's "la la la's" and simplistic musical backing (and snippets of backward horns et al, okay maybe the Kinks DID "dabble" in trippiness in their music). Most people would lampoon the working class or seek to escape it, Ray Davies revelled in it:

"I like my football on a Saturday, roast beef on Sundays alright, I go to Blackpool for my holiday sit in the open sunlight.."

The track also contains one of my favorite lines. Should I someday find a neighborhood that I love and want to live forever in it has already been aptly sung by Ray:

The flipside is equally good and joins the slim volume of Kinks singles where one side  is equally as good as the other. I will own up to being introduced to "David Watts" via The Jam's version on "All Mod Cons" when I scored a cut out copy of the U.S. version of the LP in 1980.  It was not until I saw The Jam live at the Trenton War Memorial in May of 1982 that I heard the original when the day after the gig a DJ on my favorite "local" college radio station (WPRB, Princeton University) played it and said something to the affect of "The Jam played a really good version of this last night" (somehow I heard it despite the ringing in my ears as I'd swear The Jam were the loudest band I'd ever seen...). That fall I borrowed the double LP "Kink Kronikles" from a friend and furthered my mid 60's Kinks education and got me firmly hooked on R.D.D's paean to the head boy at the school who gets all the girls and scores all the goals.  "David Watts" is still one of my favorite Kinks tracks, not because of the Jam cover, but because of it's infectious melody, the "fa fa fa fa.." bit, the driving Nicky Hopkin's piano, Pete Quaife's persistent bass line and Ray's laissez-faire attitude about the song's subject matter. 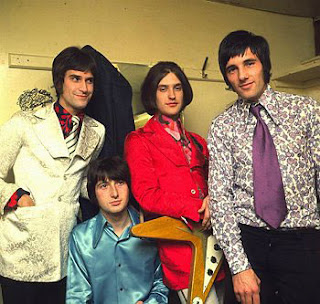 A very good post about a very good song by a great band. The Kinks Kronkiles is an excellent gateway, to use the 21st Century cliche, to the Kinks.

A truly great place, could I join in?
You have my true admiration.

A great post, and that's why I too love The Kinks! No psychedelia on the village green,ha ha better have a cricket game.