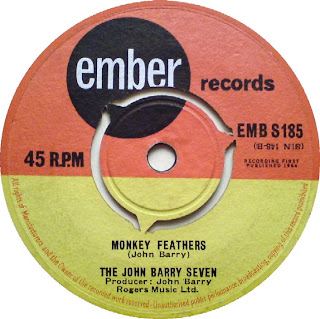 THE JOHN BARRY SEVEN-Monkey Feathers/Zulu Stamp U.K. Ember EMB S185 1964
So I've just read that the great John Barry passed way today at the age of 77 (well I'd read it this morning but *%~`<+^! Blogger wouldn't allow my first draft to publish without great bits missing out of it.  Hopefully it'll work this time as I've been messing with this god damn post all freaking day to make it visible, *uckers). Rather than eulogize him in a meandering long winded tribute I thought it would be nice to select my favorite record of his and tell you something about it.
To the world outside our little community of record creepers "in the know" John Barry will always be known for all the film scores he's done, certainly of course, the most famous being his plethora of James Bond film soundtrack work.  Many are unfamiliar with the fact that he briefly had a simultaneous career leading an instrumental rock n' roll combo called The John Barry Seven (see Anorak Thing July, 13, 2010).
Many years ago I bought a 3 CD John Barry box set of dubious nature and it contained a CD of the soundtrack for the film "Zulu", it's bonus tracks were four "beat group" versions of some of the movements from the film score. One of which, "Monkey Feathers" blew me away.  A few years later I scored the single.
"Monkey Feathers" coolness for me, is rooted in the twangy-distorted main guitar lick.  It's got a certain "weirdness" to it that makes it different from the dreadfully boring typical surf guitar "twang" and there's some great punctuated brass/drums bursts that break it all up and these campy flutes that string it all along. "Zulu Stamp" repeats the formula though lacking as catchy a main guitar riff as the A-side it's not nearly as interesting, though there's added saxophones on this track to "duel" with the flutes.
Both sides appeared on the CD compilation "Ember Beat Vol. 1 (1962-64) : Tell Me".

Great selection. Amazing how so many different selections from the JB back catalogue have been popped into play today...