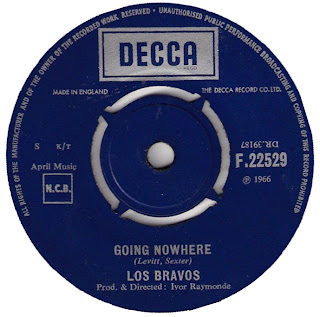 Spain's Los Bravos will be known everywhere as one hit wonders with their mega international hit "Black Is Black", which is criminal because they had so much more to offer.

"Going Nowhere" is my favorite single by them.  The band's German lead singer's (Mike Kogel) voice is occasionally a bit histrionic for my ears (like Gene Pitney if someone had his fingers in a vice)  but fortunately there's enough going on musically to overpower him.  This number is a perfect mix where you can have some really distorted ripping guitar and then soulful breaks with sax, organ and vibes.  Very danceable.  Back in the "Hub City Soul" days we got a lot of dance floor mileage out of this track.  "Brand New Baby" is not a terrible song, it's just sort of.."there"?!  It's the same sort of formula: horns, fuzzed out guitar but the lead singer's voice is so far up front it's almost grating.

Both tracks are available on the "soundtrack " CD "Los Chicos Con Las Chicas" from Amazon. 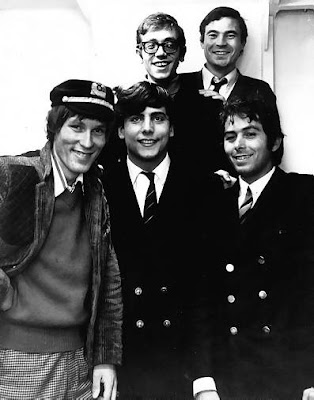 Their version of Bring A Little Lovin (Vanda/Young) is thunderous. Always used to fit that in to my DJ sets.

Yeah, nice one by Los Bravos.

I uploaded this clip on YouTube thinking you might find it interesting. It's 60s French Quebec artist Jenny Rock doing Los Bravos' Black is Black.