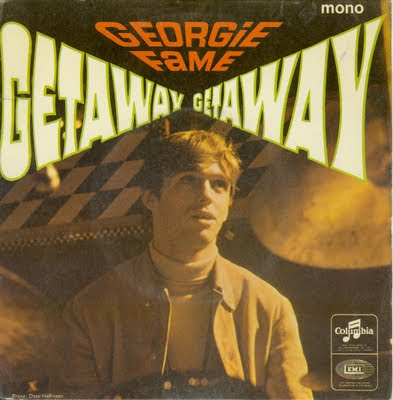 December 1966's "Getaway" E.P. was an odd move for Columbia as it coupled Georgie's June 1966 U.K. #1 "Getaway" with his very last single for the label, his version of Billy Stewart's "Sitting In The Park" (also released in December 1966 as Columbia DB 8096).  It was possibly also because he had already defected to CBS, broke up the Blue Flames and was about to ditch the band's mix of jazz, blues, soul, r&b and ska for a more straight forward approach that featured mostly jazz sandwiched in between ballads and the dreadful "all round entertainer" moniker.

"Getaway" was a jaunty number, originally written for a gasoline commercial (or so the story goes, though no one has come forth with the jingle, which would be amusing to hear). It was Georgie's first airing of an original composition of his, something of a rarity among his recorded 60's works.  Subsequent TV appearances to promote usually saw Georgie step from behind the Hammond to strum a guitar to promote it (see below). "See Saw", a Don Covay cover, utilizes the usual flair and panache associated with 1966 Georgie Fame and the Blue Flames (who were dissolved by the time this E.P. was released)of a solid and strong  horn section with some typical groovy Hammond work from Georgie.  "Ride Your Pony" follows the same template, though certainly not the band's best soul cover it is saved by the their "Hammond n' horns".  Rather than attempt a carbon copy of Billy Stewart's brilliant soul ballad "Sitting In The Park" Fame chose to rework it a bit starting with a lovely horn intro by trumpeter and long time Blue Flames side man Eddie "Tan Tan" Thorton.  And of course as usual the instrumentation is stellar and Fame instead of choosing to emulate Stewart's falsetto chooses his own tone for the lead vocals.

"See Saw" was recently featured on the excellent Georgie Fame CD compilation "The Mod Years 1964-1966". "Getaway" and "Sitting In the Park" can be found on a budget CD compilation "The Very Best of Georgie Fame" as well as the starting point for many of us back in the day "20 Beat Classics" (which is still thankfully in print!)and also includes "Ride Your Pony".

Hear "Sitting in The Park":

Another great version of "Sitting In The Park" was by the Zombies, who did it on the BBC & which appears on the Zombie Heaven box set:

It sounds like it was recorded off the radio, which gives it an otherworldly sort of vibe.

Also, I was thinking about how Georgie Fame's career turned more "MOR-ish" when he signed w/CBS in 1967 & I think one of the reasons why is that Georgie got his start in the '50s, when people like Sir Cliff Richard & Billy Fury were turned into "all-round" entertainers" & Georgie (or his management)probably thought that such a move would prolong his career.

You are correct sir. His manager urged him to drop the r&b/soul and he was signed to CBS for a huge advance where his music got a bit diluted.

Gotta love Georgie, I've seen him live a couple of times and he is still pretty amazing.

Glad all four of those great tracks made it to the US album of the same name.