Nicked By The Walker Brothers:The Motions "My Love Is Growing"


According to the liner notes of a Pseudonym Motions CD the band met Scott Walker and Walker Brothers associate John Stewart whilst in the U.K. recording their feedback laden mod/freakbeat opus "Everything That's Mine".  The band returned to the U.K. to record their 2nd album "Their Own Way" with Walker and Stewart producing (though it has been stated that Stewart did all the production while Walker napped).  Whilst recording the album which included "My Love Is Growing", Scott Walker liked it so much he indicated that he felt it was right for the Walker Brothers.  The Walker Brothers eventually cut their own version and  released it as the flip side to "Baby you Don't Have To Tell Me" (U.K. Phillips BF 1497) in July 1966.  However instead of crediting the song's composer Robbie van Leeuwen (the band's lead guitarist and main sole songwriter) it was credited to John Stewart! 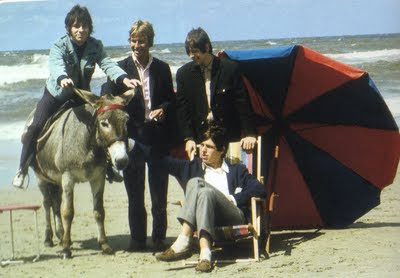 "My Love Is Growing" is sort of a vocal number, you could say that both sides bear slight resemblances to The Beach Boys or The Walker Brothers but its saved from being too schmaltzy thanks to the crash-bang-wallop musical backing that sounds like The Kinks when they applied the same technique to say "The World Keeps Going Round" with some great key changes done with heavy chording? Lead singer Rudy Bennett sounds groovy as always, soulful even.  "Why Don't you Take It" follows the same formula as the "A" side though less rough edged, it's actually fairly mundane.

Both sides were collected on an essential Pseudonym Records CD collection that compiles their first two albums and singles in between.

Hear "My Love Is Growing":

Email ThisBlogThis!Share to TwitterShare to FacebookShare to Pinterest
Labels: The Motions