Great Albums of the Sixties: The Koobas 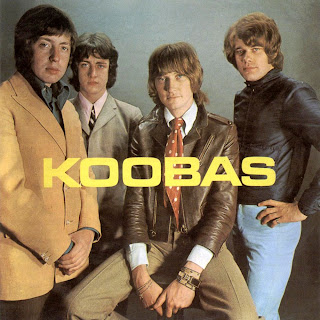 Liverpool's Koobas (Stu Leathwood-vocals/guitar, Roy Morris-guitar, Keith Ellis-bass/vocals and Tony O'Reilly-drums) had barely made a mark on the world despite 6 good singles (one as "The Kubas") and one utterly terrible one ("Sally" Columbia DB 8103, find it on YouTube and prove me wrong).  Yet somehow someone at EMI saw enough promise to allow them a full length LP.  The band spent the latter part of 1968 at EMI's famed Abbey Road studios cutting what would be their one and only long player (produced by David Paramour and engineered by one Geoff Emerick).

Side One kicks off with the Rickenbacker driven "Royston Rose" complete with fuzz guitar, proto-prog breaks and a chunky rhythm, it's also sung by lead guitarist Roy Morris making his vocal debut. "Where Are The Friends" kicks off with a silly/campy vocal intro like some drunk biddy from a tea time orchestra dedicating "To Miss Lucy Nation of 52 Le Shafts Street to her son Stan now serving in the Lebanon....".  With it's high octave Moody Blue's styled backing vocals and tight arrangement it's one of my fave tracks on the LP aided in no part to Ellis' stellar bass runs.  "Constantly Changing" again relies on some spooky Moodies type vocals and is by far the trippiest number on the record with the descending backing vocals interwoven with organ and some precision breaks that just build and build. "Here's A Day" give the band the opportunity to do their salute to Liverpool in a perfect campy '67 Kinks style, all knees up, dripping on the lino and brown ale.  Easily one of the album's most interesting tracks, it's a rock opera of sorts alternating between singing about the everyman ("on the bike ride to the shipyard all the lads a me don't like Mondays...") and a one sided conversation to no one in particular.  "Fade Forever" is sort of a blue eyed soul crooner of sorts, but don't let that fool you it's a great track, starting out with (as many of the albums cuts do) a bizarre spoken intro. The Mellotron makes it's appearance beneath Leathwood's impassioned vocals and stellar playing by the band.  It also features a slightly deadly spot where the volume drops very low and bounces back at an extremely loud level towards the end, it's a bitch the first time it gets you, especially if you were wearing headphones!

Side Two bursts forth with the band's ode to civil upheaval, "Barricades", a topical number with the Soviet seizure of Czechoslovakia and student riots in '68 whilst the LP was in the process of being written.  Distorted guitar, keyboards and layers of melodic guitars weave around another heavy but well executed track, with snippets of a Rupert Brooke poem being recited over the barrage of explosions and fuzzed out guitar solo.  Ever since Janis Joplin butchered "A Little Piece Of My Heart" (look for an upcoming post here titled "F*ck You, Janis" on this and similar aberrations) I don't really need to hear anyone else do it, even The Koobas, but considering it's the only non-original track on the whole LP I won't begrudge them their attempt.  "Gold Leaf Tree" starts off with some eerie noise and pitches into something like a Timebox track meets The Fox (of "Secondhand Love" Fontana record LP fame), in fact it's so damned close to Timebox's sound I'm wondering if they were the inspiration (complete with a flute and well structured backing vocals), it's sung by bassist Keith Ellis. "Mr. Claire" is a one sided conversation of a man resigning from the firm set to music.  The LP closes with "Circus", a brilliant little rock opera of sorts focusing on different facets of a circus (ringmaster, clowns, elephants, jugglers, high wire acts etc) each part having their own little 20-30 second song all strung together by a delightful melody and introduced by a rapid fire chorus of multiple voices spewing out well written visual imagery.

Sadly the LP did nothing and The Koobas chucked in it soon afterwards.  Luckily for us it's still in print on CD reissue.

All of the album's tracks can be found on YouTube, one user:

has uploaded all 10 of the Lp's tracks for your listening pleasure along with other Koobas single tracks.
By Wilthomer - May 08, 2011

(look for an upcoming post here titled "F*ck You, Janis" on this and similar aberrations)

-For this, I thank you in advance.

correct caption for the live pic of the Koobas should read:
30-05-1968 Monsterkonzert, Hallenstadion, Zürich, Switzerland.
Photo: Bruno Torricelli
if you want to know more about the Monsterkonzert have a look here:
http://monsterkonzert.blogspot.ch/