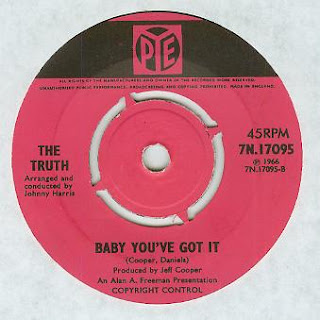 THE TRUTH-I Go To Sleep/Baby You've Got It U.K. Pye 7N.17095 1966
This was the fourth 45 by Frank Ailello and Steven Jameson aka The Truth.  On side "A" we have a fairly normal treatment of one of Ray Davie's most famous cast off's "I Go To Sleep".  Long before his paramour Chrissie Hynde and her band The Pretenders cut a version of it the tune was released in the U.K. first by The Applejacks (Decca F 12216 August 1965) and then by Peggy Lee (with a smoky, jazzy version in September 1965 on Capitol CL 15413). The Truth's version in April 1966 was the third (there would be numerous other U.K. versions before The Pretenders got their mits on it).
Strangely The Truth's version is the most faithful to Ray's original living room demo of all the versions I've heard, right down the plonky Joe Meek-ish piano trill and probably my favorite thanks to a stellar arrangement and its swinging yet rocking delivery. "Baby You've Got It" (not to be confused by the Maurice & The Radiants/Action number of the same name) is by far one of the band's strongest numbers.  From its repetitive gritty main riff and total mod/discotheque '66 feel of dancibility it doesn't let up and the raw vocals by the lads are quite soulful.
"Baby You've Got It" was comped on Sequel's "Freakbeat Freakout" CD. Both sides are also available on the Truth CD collection/compilation "Who's Wrong: Mod Bedlam 1965-1969".
Hear "I Go To Sleep":
http://youtu.be/bHIwBObW21M
Hear "Baby You've Got It":
http://youtu.be/GaL76h6zN0I
By Wilthomer - May 31, 2011

Ever hear the Don Everly-produced version of "I Go To Sleep" by Adrian Pride on US WB? Superlative! No idea who the guy was (maybe English?) but both sides of the 45 were excellent. Picked it up for a buck 20 some years ago.

Actually the drummer for a certain Mpls foursome made me a CD of tunes called "Stray Rays" with all of these wiggy 60's RD tunes!