By 1969 you'd think Herman's Hermits ﻿had all but evaporated but they had not.  Somehow they came through psychedelia unscathed in the U.K., though their U.S. hit days were long gone.  Today's subject, April 1969's "My Sentimental Friend" is a watershed of sorts on varying levels for the band. It was the band's highest charting single in England  (#2) since their debut "I'm Into Something Good" (#1) and though they had at least half a dozen Top Ten U.K. hits still in the wings the band were clearly feeling the strains of five years in the industry.The fact that unlike most previous other U.K. 45's that it did not garner an American release in fact marked the end of any more singles by the band being released in the States (where they were third highest selling U.K. act behind The Beatles and The Rolling Stones).  It also ushered in a period (as evidenced by the b&w TV clip below) where lead singer Peter Noone was being pushed forward that would lead to the eventual billing as "Peter Noone & Herman;s Hermits" for their last 45 together (November 1970's "Lady Barbara") before both parties went their separate ways, Noone to a few solo hits (including a pre-Ziggy era cover of Bowie's "Oh You Pretty Things", #12 in the U.K. in June 1971) and the cabaret/State fair grind for the Hermits. 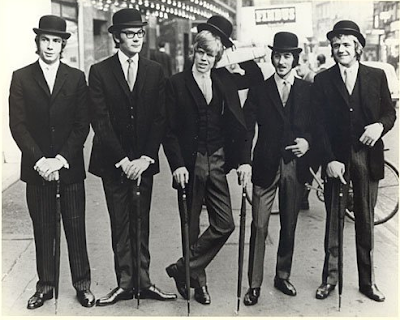 "My Sentimental Friend" is sort of schlocky.  It's a ballad but the orchestration and the melody get me in the same way The Easybeat's "Hello How are You" (also a schlocky ballad) does.  In fact the arrangement reminds me a lot of the '69 era Bee Gees stuff with it's grandiose production/orchestration. "My Lady" is not one of their best and really doesn't do it for me, it's not The Troggs/Jet Harris track of the same name and it's mood (and this awful flute)reek of variety show and cabaret.

Both tracks are available on EMI's CD compilation of their work "A's, B's and EP's:Mono"

Aw, whenever I see Peter Noone I'm reminded of seeing HH on TV when I was about 6 and my 12yr old sister crying because she had such a huge crush on him! (Luckily she won't be reading this...) Thanks for that sweet memory! Apologies if you've mentioned it already anywhere on Anorak Thing, but I think the track 'It's Alright Now' from '69 is also a bit of a corker, at least it is for them...

Herman's Hermits were like the Dave Clark 5 in that both groups scored hits in the UK in the late 60s after their US hit making days were over.

Do you have the British Invasion DVD set that Reelin' In the Years put out a yr. or two ago? The Small Faces one was the most amazing, but the Herman Hermit's one was pretty good too.

C I am not familar with the track you mentioned so I have have to seek it out, my cousins were also in love with Peter Noone (and The Monkees). Diskojoe I have the Small Face's DVD but have not gotten any of the other ones in the series yet.