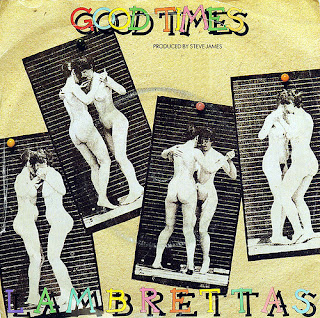 British '79 Mod bands don't get much more maligned that The Lambrettas (except maybe, The Merton Parkas).  Regardless of whether they were bandwagon jumpers, johnny come latelys or trendies or what have you they made a few decent records.  The band at some point decided that despite having a moniker that would forever align them with the movement, mod was dead and they needed to embrace a new image.  Still slogging it out on Elton John's Rocket label they embarked on an ambitious path to a new sound in 1981.  Gone were the chirpy laddish mod pop songs about "living for today" and "beat boys in the jet age".  The Lambrettas music got a bit more "serious" lyrically with more cynicism creeping into the words of their songs and their sound was quite different from their jumpy power poppy formula.

"Good Times" marked the debut of the "post-mod" Lambrettas.  Following their new "sound" that would be prevalent on their second and final LP "Ambience" (released shortly after this single) the guitar utilizes the jazz chorus effect so loved by Andy Somers of The Police with bits of synthesizer and distinctly "modern" drum sounds (fortunately the band opted for a real drummer and did not use a drum machine or syndrums on this record).  Whats actually good about the track is it's biting delivery and the lyrics.  Lead singer Jez Bird sings with venom and the lyrics reflect disillusion with growing old as it disdainfully eschews nostalgia.  Its akin to the Jam's "Burning Sky" or The Kinks "Do You Remember Walter", though not nearly as cheefrul. The flipside, "Lamba-Samba" is a dreadful instrumental of heavy Police mimicking magnitude.

The band would cull one more single ("Decent Town") from the "Ambience" LP and then attempting a dreadful Duran Duran styled cover of "Somebody To Love" (their very last 45) in 1982 before calling it a day.

Both sides appear on the double CD retrospective "Da-a-ance:The Anthology", which I've just learned is already out of print.
By Wilthomer - May 16, 2011

Email ThisBlogThis!Share to TwitterShare to FacebookShare to Pinterest
Labels: 79 mod, The Lambrettas