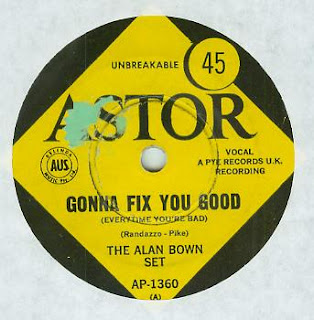 This was the fifth and final single by London r&b connoisseurs The Alan Bown Set (led by ex-John Barry Seven trumpeter Alan Bown) before they took the path that Zoot Money and so many other r&b peers did and went psychedelic.

"Gonna Fix You Good" is a cover of a track by Little Anthony & the Imperials.  I'll have to say I've always given kudos to this band for their soul cover selections as no one else to my knowledge was doing unlike say "My Girl" where there were probably 12 versions of it out there.  Believe it or not I think they do the number justice, bumping the pace up a notch and also no doubt because I think the band's lead singer Jess Roden has a voice that's far more powerful than Little Anthony's fey warbling.  Of course the musical backing is impeccable too, though the backing vocals are a bit much.  The flipside, "I Really, Really Care" is my fave track by the band. It's lead by some very raw (in a good way) vocals by Roden, solid brass backing and an over the top distorted guitar.  I played the hell out of it back in my DJ years at Hub City Soul and elsewhere and it usually went down fairly well on the floor.

Both sides appeared on the Sequel Alan Bown Set "Emergency 999" CD compilation (now out of print) and "I Really Really Care" appeared on Castle's "Doin' The Mod 4 : Ready, Steady, Stop!".

Email ThisBlogThis!Share to TwitterShare to FacebookShare to Pinterest
Labels: The Alan Bown Set

brilliant... the record (of course, yes) but never seen that label before... in fact, never knew it'd been released in australia... thanks for posting
ns
jessroden.com