Well kids we here in Lower Binfield are hunkering/bunkering down for the inevitable onslaught of Hurricane Irene which should hit us around midnight tonight.  In the Dunkirk spirit that prevails in this household I give you today's post....

The Equals have always been one of my fave 60's bands.  I first heard "Baby Come Back" on the Friday night 60's program on WPRB back in 1984 and within a year had secured their U.S. 1968 RCA LP "Baby Come Back" which had some of their best tracks, including a number that I was already familiar with through a cover by '79 mod heroes The Purple Hearts called "A Guy Who Made Her A Star"!

Admittedly "Laurel And Hardy" is probably one of thee worst Equals tracks ever, it's just god awful unlistenable stuff!! But flip the record over and woah!  "The Guy Who Made Her A Star" is actually pretty subtle as Equals tracks go.  It lacks that amphetamine driving force found on so many other stompers like "I Won't Be there" or "Softly Softly", but this is in no way detrimental  to the song.  It's slow groove is it's key as Derv Gordon sings about the girl who became a star and forgot all about the guy who busted his back getting her there.  Eddie Grant plays a brilliant but low key solo and it's back to business, killer track.

"Laurel And Hardy" has graced several Equals "Greatest Hits" compilations, though I'm not sure whether or not "The Guy Who Made Her A Star" has ever been comped anywhere. Sadly it does not appear as though there has been an exhaustive Equals CD compilation nor do there appear to be too many Equals CD's even in print!

Hear "The Guy Who Made Her A Star": 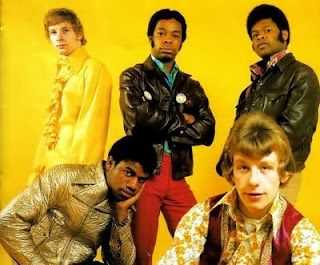 Email ThisBlogThis!Share to TwitterShare to FacebookShare to Pinterest
Labels: The Equals

Hope Irene didn't do too much damage in Lower Binfield. The Witch City only got rain & wind.

The Equals CD which I have is called Viva Equals: The Very Best of the Equals & has the very same picture you posted on the front cover. I picked it up for $1.99 @ a FYE mall store which is now long gone & ranks as one of my fave rave bargain bin pickups.

"The Guy Who Made Her A Star" is included on the ESSENTIAL 'Black Skin Blue Eyed Boys' anthology that Castle/Sequel released in '99.