The Merseybeats via James Brown


Back in the 80's Edsel records introduced myself and a host of other mod/60's types to Merseybeat music via their LP compilations of material by The Mojos, The Escorts, The Big 3 and The Merseybeats and a various artists LP of Liverpool '63-'64 material culled from the Oriole label called "Let's Stomp".  The Merseybeats were my fave of the bunch, they also had a larger scope of material of all of the bands mentioned. That meant that the folks at Edsel had a wide range of tracks to utilize for their "Beats And Ballads" compilation LP .  One of the tracks they overlooked (the band had 8 singles, three E.P.'s and a LP to choose from) was the B-side from this 45 from September 1965, their next to last single for Fontana. Interestingly the band were then being managed by The Who's handlers Chris Stamp and Kit Lambert and the latter produced the 45.

Interestingly both sides of this single came via James Brown. The A-side, "I Love You, Yes I Do", is taken from the flipside of Brown's 1961 single "Just You And Me Darling" (a stage favorite of their stable mates The Who).  The Merseybeats turn it into a soppy dead boring beat ballad, it's lifeless and utterly pointless (the James Brown original is no rocker either!). The flip side is "Good Good Lovin'" is also a J.B. 1959 track It was covered by Chubby Checker, which is most likely where The Merseybeats heard it from as the J.B. side was not issued in the U.K. but the Checker version was in 1961.  I'm not certain why the compilers over at Edsel left this track off in favor of a few weak ballads (like the A-side). Hands down it is without a doubt one of the most red hot Liverpool 60's singles ever.  It's manic!  The band play their hearts out and rock it out at twice the speed of the James Brown original and, literally, make it their own with some raw guitar licks.  I turned my pals The Swingin' Neckbreakers onto it in the early 90's and it became a staple of their live repertoire for quite a while. 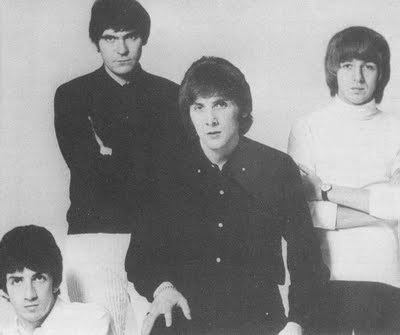 Both sides appeared on the excellent 2002 Bear Family CD "I Think Of You" which compiles all of their original 60's tracks (including a few German language versions of their tracks) in one place.

Email ThisBlogThis!Share to TwitterShare to FacebookShare to Pinterest
Labels: The Merseybeats

Yet another one to add to my must hear list...

Another to add to a CD for you methinks!