The Loot on CBS

I'm completely puzzled about The Loot.  We've discussed several of their records on the Page One label (you can view them here):

What always perplexes me is that they couldn't have possibly have been the same band as has often been reported in various fanzines and even "Record Collector"!  They managed five singles on Page One and two on CBS.  The two CBS offerings by "The Loot" (today's topic included) in no way musically resemble the Page One act called 'The Loot".  That's not to say that either version is bad, in fact I rather like the CBS Loot tracks I've heard.  That's both sides of today's post and it's CBS follow up the anti-flower power cash-in "Don't Turn Around" (UK CBS 3231) and equally dig the Page One Loot's tunes like "Baby Come Closer", "She's A Winner" and "Radio City".  Can anyone of you sort me out?

Okay onto the music at hand! "Whenever You're Ready" is a slick '67 style pop song, nothing trippy, nothing "comtemporary" in any sort of gimmickery, just a straight ahead uptempo pop song.  I'd compare it to The Grass Roots but with better lead/backing vocals and some groovy organ behind it all.  "I Got What You Want" is in a similar vein, though far superior in my book because it's a bit punchier with some cool power chord breaks and has some great 60's  young lad on the pull lyrics "your body's so slim, but you won't give in.....". 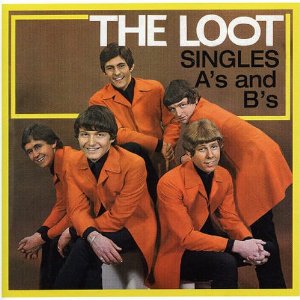 Hear "Whenever You're Ready":

Hear "I Got What You Want":

Email ThisBlogThis!Share to TwitterShare to FacebookShare to Pinterest
Labels: The Loot

There's a Loot comp or soundtrack cd due out in the UK pretty soon, on a label called Angel Air. Will post more details when I get them.

Sorry. It's the soundtrack to the film, "Loot" by Steve Ellis that is due out. Apologies all round.

No apologies due, actually the main track "Loot" is pretty freaking amazing. Rob Bailey comped it on the very first volume of his "Le Beat Bespoke" CD series! I look fwd to hearing more so I'll have to add this to my Amazon wish list!