By the time of this 45's release (April 1967) the hit making days had long expired for Liverpool's The Searchers.  This was their 16th 45 for the Pye label in the U.K. and was to be the next to last for the imprint.  The band were at the time of this single's release Mike Pender (lead vocals, rhythm guitar), Chris Curtis (lead guitar, vocals), Frank Allen (bass, vocals) and John Blunt (drums).  Not that this bothered the folks at Pye in Norway who issued this single there with a photo of the previous line up featuring their previous drummer Chris Curtis.  For more on Mr. Curtis check out:

Copping the Five American's hit "Western Union" (which saw the light in the U.S. in January 1967) the band's label presumably were hoping for a leg up on the U.K. release (which came out on Stateside simultaneously).  Sadly for our Liverpudlian heroes, it failed.  As foolish as it may have been to record, their version of "Western Union" is pure brilliant mid 60's Searchers: jangly guitars, precision harmonies and even a raga-esque guitar solo.  The flip side, "I'll Cry Tomorrow", a Pender-McNally original, is typical ho-hum Searchers B-side balladry.....next. Pressings of this single rate as one of the rarest and most expensive of all of their Pye releases (it was their next to last Pye single, their last being the equally cool/rare "Secondhand Dealer"/"Crazy Dreams"), perhaps an indication of how few were actually pressed!


Both sides cam be found on a variety of Searchers CD collections, namely the three CD retrospective "The Definitive Pye Collection". 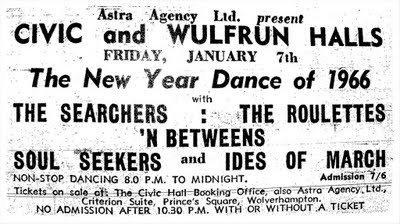 Email ThisBlogThis!Share to TwitterShare to FacebookShare to Pinterest
Labels: The Searchers Liverpool

I've never liked any version of C.C. rider before but I like that The Searchers slowed it down a bit!