More From The Genuis of Graham Gouldman


The Hollies and Graham Gouldman, a winning combination. Both hailed from Manchester and like fellow Mancunians Herman's Hermits , The Hollies recorded several Graham Gouldman compositions (both groups recorded versions of "Bus Stop").  "Look Through Any Window" was the first Gouldman track The Hollies recorded.  It went to #4 in the U.K. upon it's release in August 1965 (it also became their first U.S. single to chart in the Top 40 reaching #32). Gouldman would later give the band "Bus Stop" (June 1966) and cut a version of a track of his called "Schoolgirl" which would go unreleased until recently.

"Look Through Any Window" kicks off with Tony Hick's characteristic 12 string intro and becomes a Hollies three part harmony tour de force with lead vocalist Alan Clarke, Hicks and Graham Nash.  One of the track's strongest instrumental assets is drummer Bobby Elliot (check out the clip below of him in action as the band play live on German TV's "Beat Club", readers will note The Hollie's also performed "Very Last Day" and "I Can't Let Go" on the same episode while fellow guests The Walker Brothers lip synced...).

The flip side "So Lonely", a band original, starts out with a jarring, distorted chord of vibrato from Hick's 12 string again. It's somber but equally decent with some great Everly Brothers style harmonies from Nash and Clarke (The Hollies would later back Don and Phil doing a version of their own for their 1966 LP "Two Yanks In England").

Both tracks are available in a variety of places, none better than the 6 CD set we earlier touted: 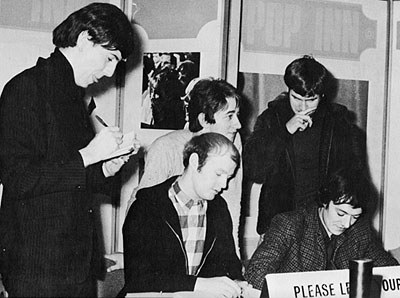 Both sides are truly "killer & no filler"

Here's an alternative video of the Hollies doing the song on Hullaballo, w/Frankie Avalon & a bizarre tie in to American football: