The Tages Get Trippy (Danish Pressing)

The Tages are without a doubt my favorite 60's band from "the Continent", hailing from Sweden they made an incredible number of consistently great records from 1964 through to their demise in early 1969.

By April 1967 their career had seen a variety of genres: British style beat music, moddy Who styled r&b, "Rubber Soul"-esq. baroque rock n' roll, harmony infused "sunshine pop" and then dabbling in psychedelia.  This 45, their 14th, landed somewhere in the middle of the latter two genres. 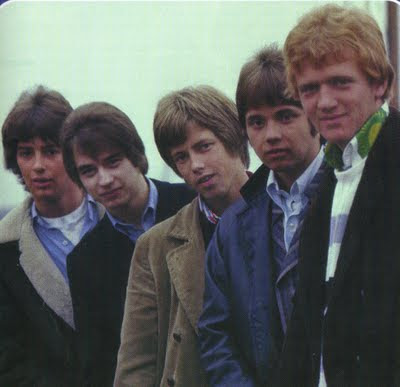 "I'm Going Out" is a cover of a Leslie Gore  track that originally graced the B-side of her last big U.S. hit "California Nights" (the band also recorded "Treat Me Like A Lady", a version of her "Treat Me Like A Lady", a track from her "California Nights" album). The Tages utilize their knack for precise harmonies on this track and though it's not one of their best tracks it's well done and not at all unlistenable. The B-side is a territory that The Tages rarely brushed against: full blown psychedelia .  This is their first experiment with the sound (their next example of full on lysergic energy is the wiggy "Revolver" influenced tale of a transvestite "She's A Man" on their essential November 1967 LP "Studio"). They were much more suited to pop-psych tracks like the strings infused "Have You Seen Your Brother Lately?" (also found on "Studio") or "Pet Sounds" influenced "I Read You Like An Open Book" single (their final 45, December 1968) but I am amused with what they came up with on the B-side. "Fuzzy Patterns" is their ode to perhaps, a hallucinogenic experience. It's a pretty trippy affair with it's hammering piano led riff that is encompassed by a chorus behind Who like bass runs that occasionally degenerate into backwards guitars, "Astronomy Domine" style announcements and back and forth.  It's not at all amatuerist for a band who rarely did this sort of stuff and it actually sounds pretty convincing instead of smelling of "cash in", then again The Tages can do no wrong in my boook (except maybe their soul covers....).

"I'm Going Out" is available on the CD issue of the Tages double LP "Tages 1964-1968", which was my first introduction to their work and amazingly still in print for (hopefully) a new generation of Tages fans to explore.

Email ThisBlogThis!Share to TwitterShare to FacebookShare to Pinterest
Labels: The Tages