My bombers, my dexys, MY high: Dexy's Midnight Runners 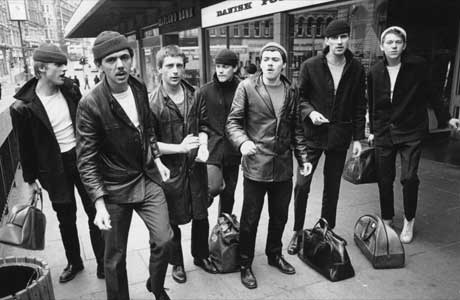 Few things give me everlasting musical joys in life.  Well maybe that's not entirely true but being swamped in more music than one could ever hope to be able to listen to I often overlook (that's a clever term for "forget") certain bands and the importance they once had in my life because the hustle and bustle and daily grind doesn't allow me the leisure and pleasure to sit on my ass and listen to music all day long. Dexy's Midnight Runners are one of those bands.
﻿


In my semi-rural teenage years there was no Internet, no cable TV, no fanzines, just good old Creem magazine.  Each issue had a feature called "Letter from Britain" that covered something going on across the Atlantic.  One month there was a feature on a band called Dexy's Midnight Runners (who I had a photo of in a book called "Cool Cats:25 Years of Rock n' Roll Style") and something called "Northern soul", I reckon this was about 1981.  The article mentioned enough mod friendly things about them and I was duly moved to go out and purchase a copy of their album "Searching For The Young Soul Rebels".  I'll admit that most of it did not impress me (in fact there are still several tracks on it that to this day are akin to sharp fingernails running across a chalkboard, I'm speaking to/of you "Thankfully Not Living In Yorkshire It Doesn't Apply"), but the stand out tracks still...well they still stand out: "Burn It Down", "Tell Me When My Light Turns Green", the brilliant big ballsy brass sound of "The Teams That Meet In Caffs" and of course "Geno", their excellent ode to Swinging London soul legend Geno Washington.  In my adult age I've come to appreciate Geno Washington, especially if I look at him from the point of view from a young soul starved British anorak.  His voice was less than mediocre and his onstage charisma more than compensated for that and sometimes you've got to go with what you've got and when Sam & Dave aren't at your beck and call I guess you'd take a demobbed Air Force Yank soul brother, even if he couldn't sing! Thanks to Creem magazine I knew who "Geno" was. The message was clear, passionate and the horns bowled me over.

Soon thereafter I made it a point to keep my ears open for Dexy's on my local college radio station (WPRB). There were more tracks that struck my fancy, "Liars A To E", "Plan B" and then eventually even "Come On Eileen" (almost a full year before being beaten to death with it daily by U.S. Top 40 radio when suddenly everyone knew who that band I'd painted a block lettering logo on a white sweatshirt in acrylic paint was!). With "Come On Eileen" came their second LP "Too Rye Ay" which collected the previous singles. I recall buying it at Crazy Eddie's in the import section shortly after Xmas in 1982 with the posthumous live Jam album "Dig The New Breed" and The Kink's "Live Kinks"(aka "Live A Kelvin Hall"). Of course I was blown away by the tracks I'd already heard and was equally taken by new ones like "The Celtic Soul Brothers", "Till I Believe In My Soul" and my favorite Dexy's track of all time "Let's Make This Precious". I fell in love with that song and later I fell in love TO that song (and the person I fell in love with would drag me to see a local band called Black 47 who's sax player was none other than original Dexy's member Geoff "JB" Blythe, who would regale us with Dexy's war stories over snakebite's at Black 47's home base Paddy Reilly's) . It's arrangement still makes the hairs stand up at the back of my neck: the horns, the organ, the driving beat and best of all the sweeping, Northern soul twinged strings. Magic, fucking magic, no other way to say it. I somehow overlooked their ridiculous bumpkin outfits (and was shocked to see once smart ex- Secret Affair drummer Seb Shelton shirtless in overalls with dirty feet for christ sake three years after the "Glory Boys" LP).

After that there was a cobbled together cash in EMI LP compilation that I bought called "Geno" with B-sides and unreleased tracks (including mildly amusing versions of "Soul Finger" AND "The Horse")and then it was all over for them as far as I was concerned, never really dug "Don't Stand Me Down" (or as I derisively referred to it as to my friends "Don't Stand Me Up").

I confess to never having been a fan of Dexy's (sorry..) but have really enjoyed reading about your introduction to them and memories! (I had that 'Cool Cats' book too - great stuff - wish I still had it) Must say however, that I did rather like this :-)
http://www.youtube.com/watch?v=42go3O-kcHs
!!!

Can remember hearing Liars for the first time. I used to ride around on my pushbike with a radio strapped to the handlebars and I stopped doing wheelies long to hear it. When Eileen was released I was really excited by it (think I was about eleven) and clearly recall it entered the charts at something like 39, then creeped up eventually getting to number 1 and drove everyone mad. Records never seem to do that any more.