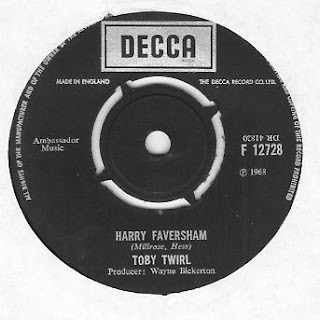 Decca and Deram benefited from having at their beck and call the services of two incredibly gifted A&R men/producers in the shape of Liverpool's Wayne Bickerton and Tony Waddington, late of Lee Curtis and The All Stars and The Pete Best Four (they will also go down in history for writing/producing and arranging all the Deram material for the U.K. based South Carolina soul trio The Flirtations). One of their crown jewels in my opinion is this happy/poppy two sider debut by Newcastle-Upon-Tyne's Toby Twirl, named after a 1950's children's book character who happened to be a pig. The band were comprised, as some sources state, from the ashes of The Shades Of Blue. They would go on to cut a total of three brilliant psych/pop 45's for Decca.  They were: David Holland (vocals),  Barry Sewell (organ), Nick Thorburn (guitar), Stuart Sommerville (bass) and John Reed (drums). 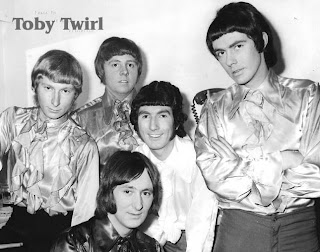 "Harry Faversham" is cheeky enough to be a giddy '67-'68 Bee Gees track with it's regal horns, subtle vibes chiming in on the main riff (a favored Bicketon/Waddington touch) and campy, over Anglicized lead vocals. The tune concerns a Walter Mitty/Mr. Limpett character named Harry Faversham who exists in a dreamworld where he's fighting dragons, black knights, gets the princess etc. The flip "Back In Time" is slightly soulful and bears a striking resemblance in structure and production to Iberian faves Los Iberos "Hiding Behind My Smile" (which just happened to be recorded in the U.K. and written and produced by Messrs. Bickerton and Waddinton). It's another slice of cheery late 60's U.K. pop with an almost "Northern soul" (god sometimes I hate using that phrase..) feel to it with some high Four Seasons/Tokens style harmony backing vocals and the classic horns, organ, vibes all laid out by crack session man on Decca's payroll. The slick call and response vocals and the horns (who's riff sounds slightly like Herb Alpert meets "Hall Of The Mountain King") and the incessant "ba-ba-bop-bop-bop-ba" backing chorus is too catchy to not love.
The fact that the band were responsible for three stunning 45's would lead one to believe that there would be a Toby Twirl compilation out there, but none exists as of yet. It is even more criminal that neither side of this 45 graced any volumes of either the "Rubble" or "Great British Psychedelic Trip" compilation series (which leaned heavily, esp. in the case of the latter, on Decca releases). Go figure!