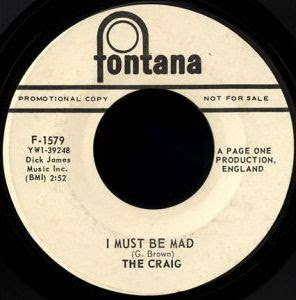 I've long sung the praises of the both influential and instrumental Bam Caruso vinyl "Rubble" LP compilation series for turning me onto "freakbeat" and British 60's psychedelia. One of the gems on my very first Bam Caruso Rubble album "The Psychedelic Snarl" was a frantic little ditty called "I Must Be Mad" by The Craig.

Released in the U.K. as Fontana TF715 in 1966 (and now commanding anywhere in the vicinity of $500 on up, and that includes the German Hansa pressing with the alternate B-side "Dancing In New Orleans"), the U.S. pressing was quite easy to come by back in the day (as were most U.S. pressings of oddball U.K. freakbeat 45's). Though it's gotten pricey these days it's regardless an amazing record. "I Must Be Mad" is a full on ballistic raver, like The Kinks on amphetamines (and produced by Larry Page!). It truly defines freakbeat with all the essential ingredients:frantic/distorted guitar work, manic intensity and brilliant/energetic drumming topped off by somewhat soulful/impassioned vocals sung by a man who truly sounds like he is going "mad". On the flip "Suspense" is a different case. That's not to say it's in any way less amazing. It's almost "soulful" (not very surprising as most bands responsible for "freakbeat" came from the "mod" scene which of course a love of soul music was a prerequisite) with it's call and response vocals and harmonies, sort of like a B-grade Action with tinges of some nice fuzzy guitar action propelling the main riff along throughout the track. "I Must Be Mad", as mentioned earlier is one the "Psychedelic Snarl" LP/CD and "Suspense" popped up on one of the volumes of the bootleg series "Rare Beat Tracks".

Listen for yourself: "I Must Be Mad" AND "Suspense":