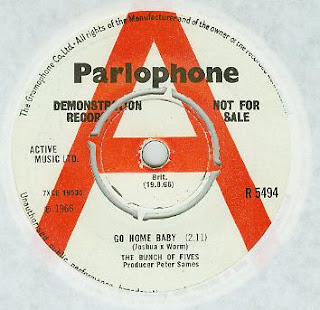 Any of you stumbling across this somewhat introverted blog (it wouldn't be called "Anorak Thing" if it wasn't catering to a distinct, small sect of 60's music freaks) are probably quite well aware of the antics of one time Pretty things drummer arch ligger and looner Viv Prince. What some of you may not be familiar with is this single, a bunch he spent a few months in. Having finished with The Pretty Things Viv embarked on a "solo" career with July 1966's "Light Of The Charge Brigade"/"Minuet For Ringo" (U.K. Columbia DB 7960). Though one can hardly call an orchestral piece produced by the Carter/Lewis ensemble a "solo" piece, but whatever, we'll give Viv his due. A month later (August 8, 1966 to be exact, or so claims the label of my demo copy of the 45) Viv was back this time being behind the drums of a group called The Bunch Of Fives. The band line up was reputed to consist of Mike Dockers (vocals), Mick Wayne (guitar, later to join Junior's Eyes who had a brief stint backing David Bowie in '69), Richard Dalling (bass), Dave Stewart (keyboards, later to join prog monsters Egg) and our very own Vivian St. Prince (drums). After Viv moved on the band mutated into The Tickle (who are resonsible for the $500+ Tony Visconti produced 45 "Subway(Smokey Pokey World)"/"Good Evening" U.K. Regal Zonophone RZ 3004 1967). Possibly on the strength of Viv The Bunch of Fives got a recording contract which leads us to....

"Go Home Baby" is not an incredible track. It's somber, light, well played and the vocals are done quite well it's just a tad, well, "wanky". The corny lyrics about being chaste and all don't fly with me either. On the other hand the flip, "At The Station" is brilliant. I'm loathe to describe things as "freakbeat" because the term has been used to describe too many things, but this record is just that. To me "freakbeat" was coined to describe British 60's r&b/beat music that was "wild", "eccentric" and in some cases proto-psychedelic. "At The Station" is all but the latter. It's a mild beat number that's punctuated by an over the top distorted riff and cool harmonies that sound slightly "dark" reminding me of The Poets or The Zombies on some of their lesser known stuff. It ranks right up their with my other personal "freakbeat" faves like The Favourite Son's "Walking Walking Walking", The Craig's "I Must Be Mad" or Carnaby's "Jump And Dance".

As pointed out by my pal Mike Sin "At the Station" cropped up on Volume Four of the series "That Driving Beat", this is long out of print but it is contained on the still in print "That Driving Beat Vol.1 to Vol.5 Box Set ". "Go Home Baby" appeared on an 80's LP compilation on See For Miles records called "60's Beat" but has not surfaced on CD to my knowledge .

Hear "At The Station":