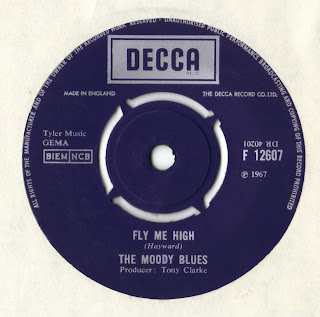 The "new look" Moody Blues featuring new members Justin Hayward (lead vocals/guitar) and John Lodge (bass/vocals) appeared on vinyl in May 1967 with this release. In addition to a "new look" the band sported a "new sound" that was a far cry from the blues/r&b image from the group who'd moved mountains with their hit interpretation of Bessie Bank's "Go Now". By May 1967 the "Summer of Love" was just around the bend and though The Moodies were not entirely entrenched in the peace and love vibe just yet they were no strangers to the world of controlled substances. When the U.K. rag "News Of The World " incorrectly reported that Mick Jagger was seen in a London night spot partaking in certain "substances" (silly them, it was really Brian Jones) it's reputed that he was in the company of certain members of The Moody Blues and the bands communal household was widely known as party central.

It should be to no surprise that the band admitted many years later that the "source" of the A-side "Fly Me High" should be none other than Cannabis-Indica . Instead of being mind-bending of even vaguely way out it's a light number. That of course is not meant to belittle its greatness, in fact it's possibly one of their strongest tracks and rather collectible. It begins with a gently ascending acoustic guitar that fades in slowly before being joined by the trademark bass/piano that was already a trademark Moodies staple. Justin Hayward's vocals (coupled with the distinct multi-level Moodies harmonies) propel the number along. What makes it so interesting is that there's nary a trace of Mellotron(soon to become a staple of the band's recordings) instead relying on piano, bass hand claps/tambourine and of course the lyrics, though silly are amusing in light of tit's "influences": "Hang onto me tight cos it doesn't last long, a few hours more and it'll be gone..".

The flipside, as mentioned in an earlier blog (see May 27, 2009's entry here) got an airing on German TV's "Beat Club" before Denny Laine had left. I'm not certain whether this was newly recorded with Hayward and Lodge or simply a left over from the previous line-up. Either way it's strangely out of place in either Moody Blues era. Written and sung by pianist Mike Pinder its not a bad track, just slightly unlike anything they'd done before, or would do again. It's rollicking barrel house piano sounds more at home on a late era Zoot Money & The Big Roll Band record or something Georgie Fame did in '67 than The Moody Blues and it's call and refrain vocals/backing vocals and double timed pace. Despite the brilliance of the A-side it failed to chart .

Both the A and B side of this single turned up on a now out of print Decca CD "Prelude" which contains various Decca/Deram mark two Moody Blues A's & B sides and unreleased numbers.

POSTSCRIPT: Some groovy clips from French TV have recently popped up on YouTube of "Fly Me High", one from 1966 before the record was even released, notice how different it is!