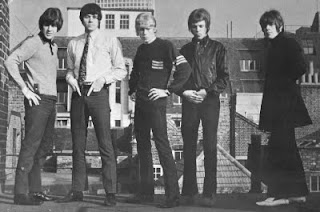 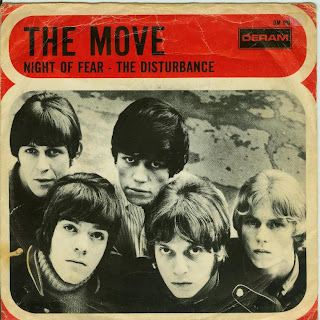 There's little point in documenting this Birmingham quintet's history but let's just give a little background. All five band members had spent considerable time honing their musical skills in various Brumbeat acts and all of whom had recorded material. Lead singer Carl Wayne and bassist Chris "Ace" Kefford were in Carl Wayne and The Vikings , lead guitarist Roy Wood was in Mike Sherdian and The Nightriders and their later manifestation Mike Sheridan's Lot (see my blog from 12/18/08), rhythm guitarist Trevor Burton had played in Danny King's Mayfair Set and drummer Bev Bevan had spells in several groups, among them the pre-Moody Blues Denny Laine act Denny and The Diplomats. All five members got together at Birmingham's Cedar Club and decided to pool their collective talent resources into one group and began playing together in late 1965 whilst some members like Roy Wood, continued to gig simultaneously with their previous "employers". Originally they began as a mod-ish soul cover band. In fact this remained part of their set well into early '67 and garnered complaints from members of The Pink Floyd with who they often shared the bill (one of the band's member was quoted in the music press as disliking playing with The Move because they "brought too many mods with them" who came to see their soul covers and "syncopated stage moves"). Shots from their early gigs show them resplendent in check trousers, crew necks, mod-ish bouffant haircuts, wide belts and slingback shoes. Eventually after nearly a year of steady gigging they were signed (along with Cat Stevens, David Bowie and Beverley) to Decca's new off shoot Deram. The band's manager, one time boxing promoter Tony Secunda brought them to the attention of Deram and ushered the band's in house songwriter Roy Wood to the fore and on December 9, 1966 their debut "Night Of Fear/Disturbance" (both sides were Wood originals) appeared eventually shooting to #2 on the British charts. 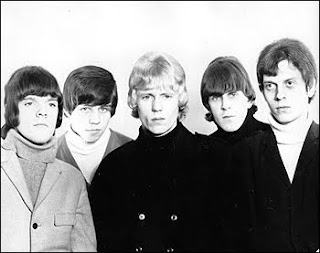 Like many of Roy Wood's original compositions both sides of the record concerned mental illness. Roy's lyrics were often misconstrued as "druggy", Roy and Co. were more about a pint of bitter than L.S.D. "Night of Fear" has lyrics that conjure images of a bad trip ("green and purple lights affect your sight, your mother cannot comfort you tonight, your brain calls out for help that's never there..."), but Roy innocently went on to explain that the song was nothing more than a common childhood story of being terrified by the dark, things that go bump in the night and an overactive imagination. Of course this could be an attempt to explain what may have been a skillful double entendre (betrayed by Ace Kefford's soulful chorus where he sings "just about the flip your mind, just about to trip your mind"). The tune's riff is built around Tchaikovsky's "War Of 1812 Overture" melody. Roy Wood stated that his parents had been big classical music fans and that he'd gotten it from them, though as the Move were quite sophisticated soul aficionados (where they had covered a host of semi-obscure U.S. soul and r&b records as part of their live act) it is entirely possible that Roy nicked it after hearing the riff appropriated by Ike & Tina Turner on their Loma 45 "Tell Her I'm Not Home". Regardless the record's sheer force cannot be denied, from Carl Wayne's powerful vocals to Ace Kefford's rumbling bass it is a power pop tour de force that is easily akin to The Who in one of their "weird" moments. The flipside, "Disturbance" is another Roy Wood homage to madness full of fuzz guitars, catchy breaks and high voiced backing vocals and sharp whistles(a fave technique of Carl Wayne during many Move track's breaks or guitar solos). Keeping in tune with the band's live show (where all members sang lead on various numbers) Roy handles half of the vocals with Carl. doing the rest. The ending degenerates into mad screaming, snorting and grunting by Carl as he pleads "why don't you stop it..oh no oh no.." as the band plays ominous/sinister sounding music and everyone (led by Roy's distinct voice) does a sort of chant (described by them as "Hammer horror film music") into the fadeout. 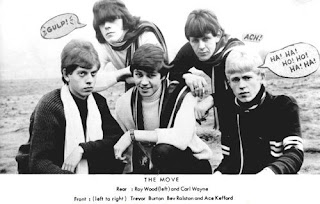 Both tracks have been issued on a multitude of Move CD's.

Here's a rare 1967 Move promo film shot inside a London clothing boutique for "Night Of Fear":