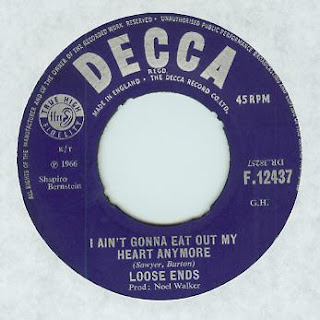 I've no clue who The Loose Ends were, just that there were five of them and they made two singles on Decca (their second being a cover of The Beatles "Taxman" released on the same day as "Revolver", see October 23, 2008 posting here for the story on that one).
The A-side is a cover of the number by The Rascals. It's rather different as well, it's just plain raw. The Rascals version is pretty punchy, this one is punky. The lead vocals take the Jagger-esque drawl one step further by making it sound more sneering, almost contemptuous but without losing it's soulfulness. The lead guitar solo is pure freakbeat, over the top and distorted like The Birds or The Sons Of Fred at their most blistering.

The flipside, "Send The People Away", is a treat because it's a rare Moody Blues number that only came out in France on an E.P. (where it was titled "People Gotta Go", see May 27, 2009 post for the scoop on this E.P.). Delivered with a soulful aplomb as the A-side it has more guts than The Moodie's take and is far more uptempo.

"I Ain't Gonna Eat Out My Heart Anymore" was contained on the CD comp "That Driving Beat:UK 60's Freakbeat Rarities Volume Two" and has recently also popped up on the deluxe box set that compiles volume's one through five of the series. "Send The People Away" cropped up ages ago on the bootleg "Rare 60's Beat Tracks Volume Three".

"I Ain't Gonna Eat Out My Heart Anymore"

Hear  "Send The People Away":