Unsung Long Players of The Sixties Part One 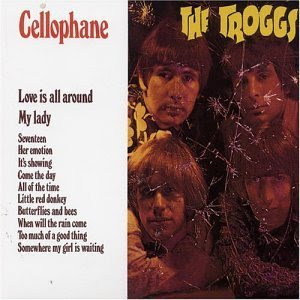 The Troggs primal four chord rock n’ roll unfairly stereotyped them as a knuckle dragging version of The Kinks (rawness but no wittiness). Rarely a band to follow trends they rode out the Sixties on a string of hits that kept them comfortable on the British charts and gainfully employed on “the Continent”.

“Cellophane” their third LP found breaking free (well, almost) of the four chord mould and for the first time employing the uses of session musicians taking them beyond their usual voice/guitar/bass/drums format.

Opening with the juvenile “Little Red Donkey”, it’s fairly obvious the leering proto-garage punk of “I Want You, “Wild Thing”, “I Can’t Control Myself” etc is nowhere to be found. “Little Red Donkey” would’ve made a great kids record, with it’s simplistic lyrics about a lazy domestic animal sporting and unlike any other Troggs number to date it sports a trumpet solo!! “Too Much Of A Good Thing” reverts to the band’s leery, primal urgency but without the chunky power Kinks/Who like chords instead giving way to a choppy rhythm and Bo Diddley-esque drum beat, easily one of my personal faves by them. “Butterflies And Bees” is written and sung by guitarist Chris Britton. Banish all thoughts of a hazy, psychedelic number (as the title seems to suggest), instead it’s actually a loungey laid back piece with floating flute that seems to echo the backing on a Gabor Szabo record. It’s impossible to comprehend upon hearing it that it’s The Troggs, but it’s rather enjoyable and lends to the varying degrees of semi-continuity of the LP. “All Of The Time” and “Seventeen” are both your archetype Reg Presley lead Troggs tracks, both seem to echo riffs that déjà vu suggests we’ve heard before?!?! “Her Emotion” (covered by a bunch of U.K. nobody’s calling themselves Cain) is a groovy little gem that seems to be about a hippie type gal (“she wears beads and bangles…she dances nude at the midnight hour”) with some wiggy chanting by the rest of the band. Drummer Ronnie Bond’s penned/sung track “When Will The Rain Come” is amazing. It’s hypnotic riff is carried away by a host of deep, ethereal chants, mild percussion and a feeling that seems to pre-date “Horse With No Name” as the listener is easily catapulted into the desert dying of thirst. “My Lady” is equally un-Troggs-like with it’s near baroque lutes/flutes and dirge type pace. The LP’s closing cut was the Troggs last chart topper “Love Is All Around”. Anyone in the know can tell you that the Troggs were about as trippy as baked beans on toast or a Sunday roast, but the haunting strings and the dreamy melody spin a monster track that’s been sadly co-opted by the “Summer of Love” marketing tag for the past 40+ years. I’m sure the band were having none of that, just watch the promo film tagged below where they look suitably uncomfortable.

“Cellophane” is getting pricey in its original form. Luckily it’s been reissued on CD by the German Repertoire label (with a ton of bonus cuts).

"Love Is All Around" promo film: