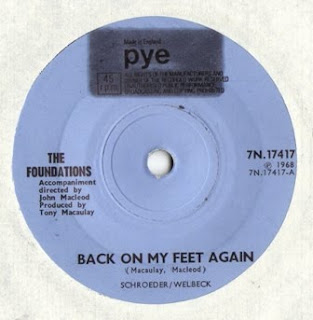 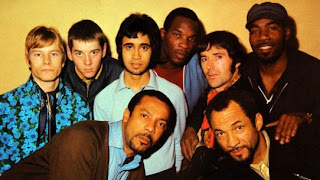 
Unless you've been living in a shack in the wilds of Oregon you'll no doubt be familiar with The Foundations via "Build Me Up Buttercup" or "Baby, Now that I've Found You". The Foundations were a multi racial British based band boasting members from the U.K., West Indies and Sri Lanka. Though their hits have tended to create the unfortunate "oldies station" overkill the Foundations were a top notch band with soulful sounds, smart styles (their drummer for awhile sported a suedehead style) and first class pop/soul tunes care of the song writing/production team of John Macleod and Tony Macauly.


Macauly/Macleod's "Back On My Feet Again" was the band's second single , released in January 1968. It followed their August 1967 number one (on both sides of the Atlantic) "Baby, Now that I've Found You". Lead by the soulful vocals of the band's original lead singer Clem Curtis (who's West Indian accent adds just the right bit of "flavor" to the tune) the number is catchy as hell from it's simple brass section blaring out the melody, it's subtle groovy Hammond twirling and solid backing vocals.

The flipside is an equally powerful pop/soul number called "I Can Take Or Leave Your Loving", a bit more downtrodden than the A-side but full of precision horn work and cool call and response backing vocals. Oddly enough Mickie Most's boys Herman's Hermit's issued a version of the song at the exact same time as their A-side (Columbia DB 8327) earning them a hit! This must have led to some interesting exchanges in the green room of "Top Of the Tops" as both acts went to plug their respective hits! Despite being a catchy little tune "Back On My Feet Again" died a death at #48 and the band would have to wait a further ten months and a new lead singer to capture #1 again with "Baby, Now That I've Found You".


Both sides are contained on numerous Foundations Pye/Sequel/Castle compilations.

Hear "Back On My Feet Again":

Hear "I Can Take Or Leave Your Loving":