Foreign E.P.'s Part One (Via Portugal)! 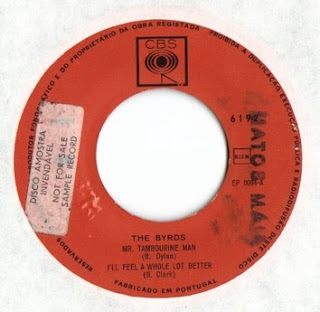 Here's an odd duck, a Portuguese Byrds E.P. Unlike most European traditions of combining two U.S. or U.K. singles by British or American acts with both their "A" and "B" sides Portuguese Sixties E.P.'s always seem to center around one "A" side and a miscellany of other tracks. Case in point they've taken Bob Dylan's "Mr. Tambourine Man" and left off it's U.S./U.K. "B" side "I Knew I'd Want You" and included the band original composition "I'll Feel A Whole Lot Better" (the U.S./U.K. "B" side of "All I Really Want To Do") alongside it on side "A" of this E.P. Side "B" takes two tracks from the "Mr. Tambourine Man" album, Jackie DeShannon's "Don't Doubt Yourself Babe" and band original "It's No Use". And unlike most of their homegrown 7"'s Portuguese pressings of foreign bands on major labels were always high quality affairs on solid vinyl with laminated, glossy hard stock E.P. picture sleeves (sadly my Byrds E.P. came without a sleeve and came in a stock CBS sleeve) that like their French counterparts offered colorful variations utilizing different photos and interesting artwork differing from American and British releases.

Indigenous Portuguese 60's rock n' roll releases are scarce, not just because there were very few and the country was economically depressed, but because the manufacturing quality was not up to the same standard as the domestic releases of foreign artists on labels like CBS or Fontana who had financial backing from their parent countries. Portuguese 60's rock n' roll singles/E.P.s often tend to come in almost tracing paper thin picture sleeves on brittle, light vinyl discs often bearing label work that in some cases was merely ink stamped (akin to some of the more rare obscure 60's Jamaican ska 45's ). This of course does not add up with general wear and tear to ensure that there will be many copies left in playable condition 40+ years on.
By Wilthomer - December 19, 2009

Email ThisBlogThis!Share to TwitterShare to FacebookShare to Pinterest
Labels: Portugal CBS The Byrds