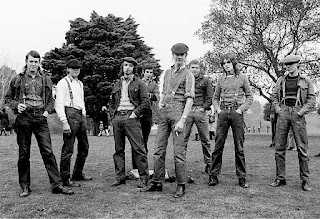 Melbourne, Australia sharpies circa 1971
One of these days I'm going to get around to chatting about about a subculture in the late 60's/early-mid 70's in Australia called the sharpies and posting some pics of this truly Australian only phenomena. They looked like a weird cross between skinheads/suedeheads/glam rockers and tacky 70's styles. They seemed to have a penchant for mullets and flares which made them look decidedly odd. But make no mistake from all I've read and the pics I've seen they were hard nuts. Unlike their British skinhead/suedehead cousins their musical tastes were pretty uncool, no reggae/rocksteady/soul for these bootboys, they were into some very heavy rock n' roll.

One of the few bands they championed that I do dig were Lobby Loyde and the Coloured Balls. Here's a clip of them playing some serious aggro music in the form of their single "Devil's Disciple" from 1973 that seems to anticipate the British Oi! movement by a good six years!

Another fine post, Bill... Love CB!! Check out their killer proto-punk monster, "Won't You Make Up Your Mind."

Cheers Lee, I've got in on their CD/LP "Ball Power".