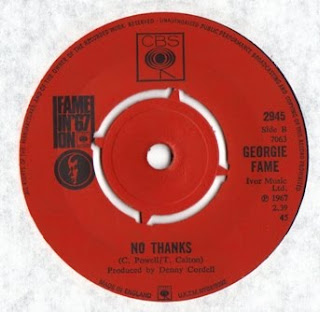 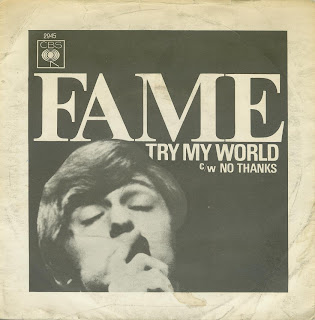 GEORGIE FAME-Try My World/No Thanks U.K. CBS 2945 1967
By 1967 the Flamingo/Hammond n' horns Clive Powell was barely a shade of his former self. He'd pensioned the Blue Flames off, switched from EMI's Columbia imprint to a lucrative deal with CBS and got decidedly more "pop" (though his high sales figures and reputation allowed him to embrace his first love: jazz, at his new home, but that'd be later after these first few singles). CBS saw big things for their new signing, giving all of his records a groovy little logo with his profile that boasted "Fame in '67 on CBS". Fans of his r&B/soul/Bluebeat days no doubt cried "foul" and "sellout", but their cries were no doubt silenced by chart placings, music weekly cover shots and "Top Of The Pops" appearances. It made sense as by '67 the writing was on the wall for the Flamingo style of British r&b. As we've discussed in other entries here on Anorak Thing Chris Farlowe, Zoot Money and Graham Bond were getting wiggy, John Mayall's Bluesbreakers had become the finishing school for guitar heroes and Brian Auger was heading for success with Julie Driscoll and The Trinity (while still simultaneously "keeping the faith" with his own career, which like Fame, led him down the "true" path: jazz).


"Try My World" is decidedly most un-r&b/soul. It's cascading harp and low key vocals lend itself perfectly to an un-made Swingin' London film where a mini skirted/knicker-less Susan George gets it on with a guy with sideburns and a bouffant hairdo in a flat with the GPO tower in the background and a mini Moke parked down on the street below while the number's muted trumpets tweet. It's not Hammond n' horns, but it works for me. The flip "No Thanks" is one of those rare 60's tracks by Georgie that's actually of his own composition. Disheartened r&b fans could not fail to take note that the Hammond and horns, complete with reedy sax solos, were not dead with "More Fame In '67 On CBS" on this B-side. Fame's delivery is confidant, almost belligerent as he sings of a fancy for the racetrack, wine and getting treated like crap by a "woman that I see downtown". Brilliant stuff with the memorable chorus: "Money get out of my bank file, bottle get off of my stack, woman get out of my woodpile, monkey get off my back". I personally got some seriously heavy dance floor action out of spinning this track once a month upstairs at a dive club in New Brunswick, New Jersey from 1997-1999. It was a staple and the floor was never empty when it came on. The public in '67 barely noticed and the record never got past #37. Little bother, as Fame's career did not falter and in fact his next (and last) #1 was just around the bend with a dreadful little tune called "The Ballad Of Bonnie And Clyde".


Both sides of this killer platter are fortunately contained on a U.K. CBS retrospective of Georgie's time on the label titled "Somebody Stole My Thunder: Jazz-Soul Grooves 1967-1971 ". 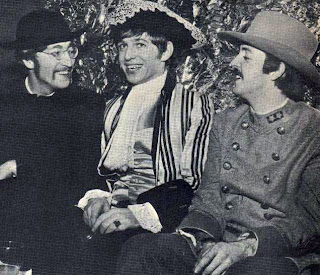 John Surman and John McLaughlin play on No Thanks