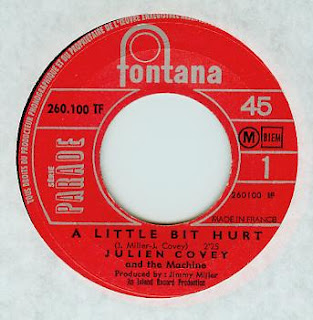 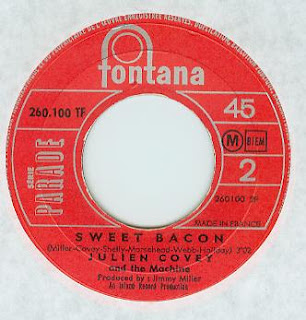 JULIEN COVEY & THE MACHINE-A Little Bit Hurt/Sweet Bacon France Fontana 260.100 TF 1967
Awwwwlright, doesn't get any more happening than this monster two sided U.K. organ groover. On the A-side we have "A Little Bit Hurt" which sounds like Mitch Ryder and The Detroit Wheels if they were a but more organ heavy. The band's soulful lead vocalist Julien Covey was also their drummer AND depped for The Who's Keith Moon on a few dates in early '67 while Moonie was recuperating from a hernia he got while throwing his kit around. His voice sounds a lot like Mitch Ryder and the organ playing is damned identical to Wynder K. Frog's stuff on Island (they both shared the same label and were both produced one of my fave knob twiddlers, the late great Jimmy Miller). "A Little Bit Hurt" benefits from a nice chanted main chorus and some (yes!) cowbell! But the flip is where it really gets out of hand (in a good way). "Sweet Bacon" will go down in U.K. 60's instro Hammond heaven (along with Wynder K. Frog's "I'm A Man", Stone's Masonry's "Flapjacks", The St. Louis Union's "English Tea" and The Small Face's "Own Up Time"). It's as, one man said, a stone gas from start to finish. Some Bluesbreakers-style lead guitar bursts and wailing, twirling ("and always twirling, twirling, twirling, twirling towards freedom"-Kodos) organ that evokes The Spencer Davis Group Mark One at the end of their (B-3 heavy) days.