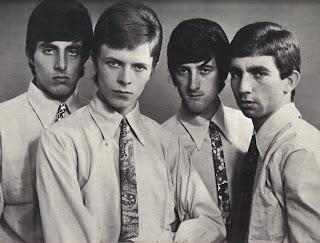 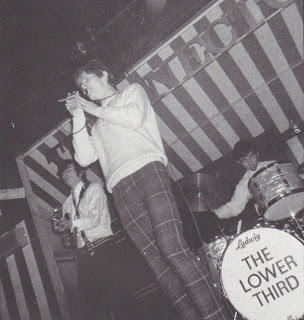 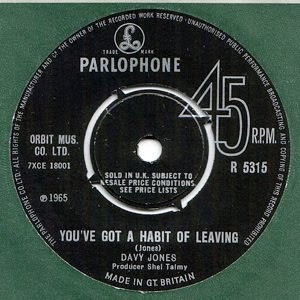 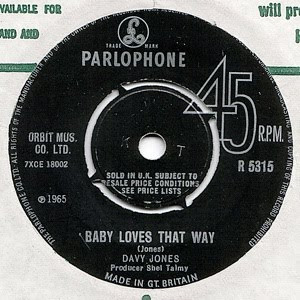 DAVY JONES (with The Lower Third)-You've Got A Habit Of Leaving/Baby Loves that Way U.K. Parlophone R 5315 1965

By August 20, 1965 David Robert Jones had been in two different bands, who released two records a piece encompassing two different styles (beat/r&b as Davie Jones and The King Bees with "Liza Jane"/"Louie Go Home" Vocallion Pop V 9221 June 1964 and r&b ala Georgie Fame/Zoot Money with The Manish Boys "I Pity The Fool"/"Take My Tip" Parlophone R 5250 March 1965). Neither record did anything. For his next venture he teamed up with three gentlemen he'd met in a coffee bar on Denmark Street in April of 1965 (then home to many of London's music publishing offices) called The Lower Third consisting of Denis "Tea Cup" Taylor (lead guitar), "Graham Rivens (bass) and Les Mighall (drums) . The quartet firmly embraced (though reluctantly for some of the group's members) the "mod" image and manager (ex-Moody Blues roadie Ralph Horton) duly took them down to Carnaby Street and got them kitted out in matching white Ben Sherman's, floral ties, grey trousers and crepe souled suede shoes. In May before any gigging could be undertaken Mighall was replaced by Phil Lancaster and the band set about gigging around, namely at London's Marquee and 100 Club, Bournemouth's Pavilion and the Isle of Wight's Ventnor Winter Garden's throughout the summer of '65. Jones used his contacts with the producer of his single with The Manish Boys, Shel Talmy to garner another Parlophone release for his new combo, whose debut he would produce further cementing the band's Who fixation. 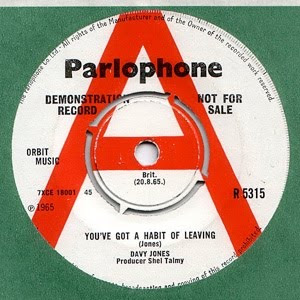 "You've Got A Habit Of Leaving" would be Jone's first original "A" side (his debut composition "Take My Tip" was regalated to the bottom side of his previous 45 with The Manish Boys). The band's obvious Who/Kinks fetish is apparent from the moment Taylor's first chord strikes and the backing vocals bear the oft familiar Who-ish feel to them. Instead of a guitar solo there's an "Anyway, Anyhow, Anywhere" styled "rave up" where Rivens does a series of swooping bass runs and Taylor elicits feedback and some wiggy Joe Meek sounding noodling while Jones blows some harp and then it all comes back to earth. The flipside, to me is the more powerful of the two as it tramps along at an almost Motown feel with it's mid tempo pace. The band provide shouting backing vocals and Taylor cranks out a brief blistering solo laden in volume and distortion. 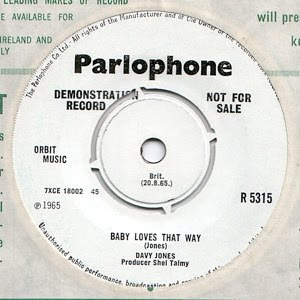 Of course it failed to make any impact and the normally inept Horton did manage to get the band another record deal with producer Tony Hatch and Pye records, but first Davy Jones would change his name to David Bowie to avoid confusion with a diminutive Mancunian playing in the pre-fab four. Like the Parlophone release here, the Pye debut would not contain the Lower Third's name anywhere on the 45 label, hastening their disenchantment and immediate demise.

"You've Got A Habit Of Leaving": 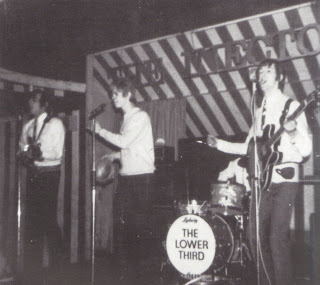 Hey! I found your blog and it's very nice to read something about one of my greatest musical heros of all time David Bowie!!! (along with the Beatles)

I'm a composer too (from Portugal but writing in english) and I would be very glad if you can listen to the tunes at: http://myspace.com/gusdayer there you'll find two songs from my latest work called «Say Don't - Look What!» and the respective link to download it FREE! Here's a 40 second preview http://www.youtube.com/watch?v=iMbJgbBFEas