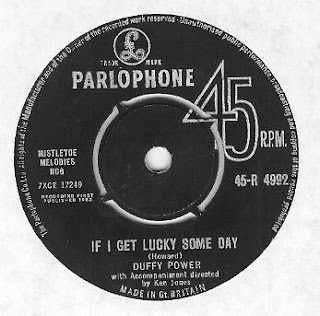 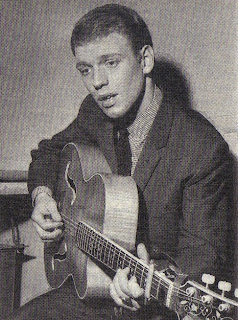 DUFFY POWER-It Ain't Necessarily So/If I Get Lucky Someday U.K. Parlophone R 4992 1963
British rhythm and blues legend Duffy Power needs no introduction. Born Ray Howard and like fellow Brit r&b icon Georgie Fame, received his new moniker care of British early 60's rock n' roll impresario Larry Parnes. Power cut a series of MOR crooner and rock n' roll records for the Fontana label before switching to EMI's Parlophone outlet and more importantly switching to playing r&b. Overnight Power's image, dress style and repertoire changed almost overnight. Speaking to "Record Collector's" John Reed in 1995 Power cited seeing the Graham Bond Organization live at The Flamingo and hearing "The Best Of Muddy Waters" over at Billy Fury's flat as being crucial to his new found makeover.
His Parlophone debut in February 1963 was the platter here in question. It would be pointless to try to catalog the number of British r&b artists who cut versions of Gershwin's "It Ain't Necessarily So". Duffy's version, thanks to his soulful voice is a cut above them all (aided by some very sophisticated guitar work by session slinger Big Jim Sullivan and some very churchy organ). The flip, is far superior with the same session men employed making it a classic example of bluesy, moddy British Sixties r&b with the organ and guitar answering each other with little riffs while Duffy sings along like a Mose Allison acolyte. Best of all it's a Duffy Power orginal (credited to him utilizing his real name in the credits).
The record didn't chart, but Power built a solid reputation with further brilliant releases in the same vein. The next being a version of "I Saw Her Standing There" where he was backed by the mighty Graham Bond Quartet (Parlophone R 5024) in May 1963. But that, as they say, is another story for another time (watch this space for it).
Luckily both sides of this 45 are available on the highly recommended Duffy Power double CD on RPM "Leapers And Sleepers" and an alternate version of "If I Get Lucky Some Day" cropped up on the equally recommended British 60's r&b CD compilation "Take My Tip: 25 British Mod Artefacts From The EMI Vaults".

"It Ain't Necessarily So":