The Kitsch Consortium Hall Of Heroes 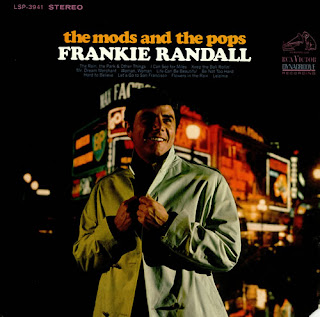 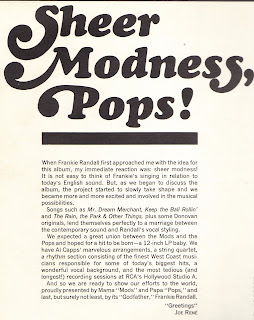 FRANKIE RANDALL-"The Mods And The Pops" U.S. LP RCA Victor LSP-3941 1968
High camp! Cheese so thick it wouldn't melt in fondue! But I love cheese. This possibly explains why I'm so enamoured with the old "SCTV" skits like "The Sammy Maudlin Show" and my hero "Bobby Bitmann" (played with City of Brotherly Love borscht belt aplomb by Eugene Levy). I also love corny LP's by 60's artists covering contemporary hits in semi hip AND unhip ways.

From what I can gather Frankie Randall was/is a wanna be Sinatra from Passiac, New Jersey. His website hysterically boasts "everyone calls Frankie Randall the real deal because he is the last link to Sinatra's Rat Pack". Ho boy..... Anyway I'm not sure who's idea it was to have this crooner of no repute cover so many "hip" songs but the LP is full of some interesting ideas, namely inclusion of a version of The Move's "Flowers In The Rain". The Move were pretty much unknown in the U.S. (despite having a few of their early singles released on A&M) at the time so points for forward thinking go to some A&R man! Even more obscure is his take on Carter/Lewis creation, The Flowerpot Men and their U.K. answer to Scott McKenzie's "San Francisco(Be Sure To Wear Some Flowers In Your Hair)", "Let's Go To San Francisco". There are also versions of Donovan's "Lelainia", The Cowsill's "The Rain, The Park And Other Things", Jay and The Technique's "Keep The Ball Rolling" and a Donovan composition called "Be Not Too Hard" that I am not familiar with. Of course all of these numbers are delivered in the lifeless supper club crooner saccharine/cheeseball style that one would expect from a wanna be Sinatra. However the crown jewel of the lot is his version of The Who's "I Can See For Miles". It's so cheezy Rhino dug it up for inclusion on their very first "Golden Throats" compilation all those years ago. It's campy, over the top and he even get the words wrong, but it's worth it (providing you paid $5.00 for the LP like I did). There's some "Association" type "ba ba ba ba's" behind Frankie's lifeless delivery with some "Along Comes Mary" style flute and sawing symphony.

Hear "I Can See For Miles":