From Bradford Via The Motor City 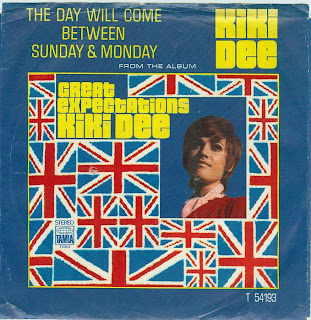 KIKI DEE-The Day Will Come Between Sunday And Monday/My Whole World Ended The Moment You Left Me U.S. Tamla T 54193 1970
The U.K.'s Kiki Dee had a pretty hard slog before Elton John scooped her up and thanks to their awful duet made her a household name on both sides of the pond.  What's criminal is that she made quite a few good records in the Sixties before fame.  Forget the pricey "Magic Carpet Ride" rendered mega expensive thanks to those "Northern" jugheads, my bets are riding on this 1970 single as her crown jewel.  Kiki goes down in history as being the only British female singer ever signed to Berry Gordy's ranks.  From her U.S. Tamla LP "Great Expectations" (TS303) came this amazing little number . A subsequent 45 release by her from the LP ("Love Makes the World Go Round"/"Jimmy") would be released on their "rock n' roll" offshoot label Rare Earth (R 5025 1971) where the likes of R. Dean Taylor, The Easybeats and the aptly named Rare Earth would musically reside.  I bought the LP in a book store in Philly in the early 90's on the strength of the LP's blinding artwork (pretty much the same as the above U.S. 45 P.S. only lacking the blue border).  I thought Kiki looked really smart , though I later found out after reading an interview with her in "Record Collector" that she was wearing a wig in the shot! The opening cut on the album, our 45 in question here, blew me away.  A few years later I scored a German P.S. 45 at the Princeton Record Exchange during their great sale of all of Radio Free Europe's 45's and then purchased this American one from my pal, Baltimore's first Northern Soul DJ, Matt Cochran.
I'm not sure how to best articulate this one beyond giving props to Kiki's strong/sultry voice and of course the usual squeaky clean, over the top Tamla-Motown production/backing so........
Have a listen for yourself:
http://www.youtube.com/watch?v=uCz5OylvO5k
Fortunately for anyone interested all of her Tamla/Motown output was recently collected on a U.K. CD "Love Makes The World Go Round:The Motown Years".
TRUE TRIVIA FACT: I had a friend who liked Kiki's hairdo on the U.S. P.S. 45 so much he had his girlfriend get her haircut like it, this was of course before any of us knew it was a wig. 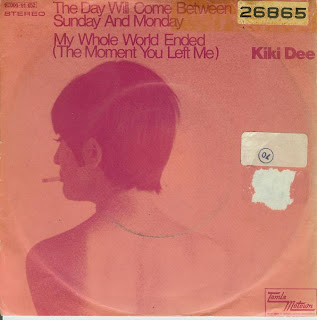