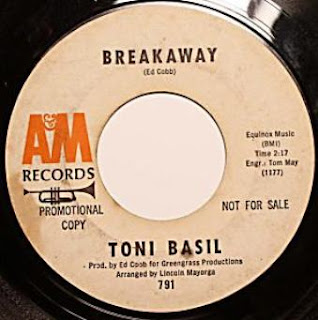 TONI BASIL-Breakaway/I'm 28 U.S. A&M 971 1966
Toni Basil is a name that is justifiably associated with bad 80's music on the strength of her dreadful hit who's name I dare not type, complete with a video of her dressed (at the age of 39!) as a cheerleader that needs to be locked away forever with parachute pants, white Capezio shoes and see through mesh sleeveless Cham's shirts to ensure they never blight the world again.  But long before this blight appeared Toni was an accomplished dancer and a choreographer for the "Shindig" show (where a young Teri Garr was a dancer, see below pic). It can safely be assumed that through her "Shindig" connections she got signed to A&M and cut this double sided monster sizzler 45.
"Breakaway" is known these days because some soulies in Northern England decided it was a great record (it is, really) and drove the price and demand up so high that can no one but sweaty/smelly record collecters can afford it.  It was written by the late Ed Cobb (the man who not only penned The Standell's  "Dirty Water" but another Northern soul staple Gloria Jone's "Tainted Love" as well as another soul classic "Every Little Bit Hurts", among many others).  Regardless of the "Northern" tag it's actually good.  It's a mid tempo groover that has a solid Motown feel thanks to the drums and the infectious rhythm.  Toni's voice is not entirely soulful or strong but the number has a feel that can move even dance floor zombies like this anorak.  "I'm 28" comes from the pen of our hero Graham Gouldman (see June 14, 2010 entry).  The track had previously appeared in the U.K. in January 1966 as "Getting Nowhere" by Friday Browne (Parlophone R 5396), produced by George Martin. Toni turns it into a dirge, but what a wonderful dirge it is, in fact I like a lot, more than the A-side even.  The lyrics concern getting older:
"I'm 28, it's getting late
What have I got to do?
My time is going, my fears are growing
My chances now are few
Dress revealing, sex appealing
Fur and feather, suede and leather,
Naughty, haughty, sure to glamorize...
It's all been advertised
But... it's getting me nowhere"
Bleak and brilliant stuff from a 23 year old gal who could move like a cat on the dance floor and was quite a looker as well!
"Breakaway" can be found on a few Northern Soul CD compilations, "I'm 28" cropped up on the wonderful 4 CD Rhino box set "One Kiss Can Lead to Another: Girl Group Sounds Lost & Found".  A promo film was made for "Breakaway" by film maker Bruce Conner, a black and white affair that featured Toni frugging and eventually taking off all of her clothes. It's often on YouTube but the good Mr. Connor bitches and it's taken down immediately, which is a pity as it should be seen if you're a straight male 60's anorak. 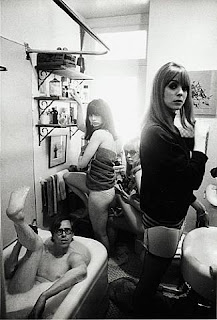