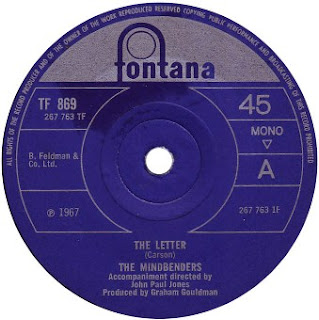 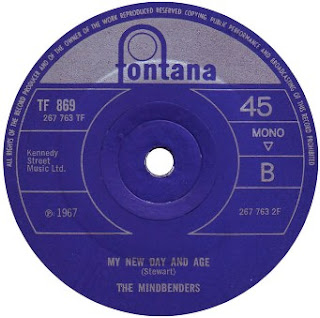 THE MINDBENDERS-The Letter/My New Day And Age U.K. Fontana TF 869 1967
Having broken with Wayne Fontana, The Mindbenders (Eric Stewart-lead vocals/guitar, Bob Lang-bass and Ric Rothwell-drums) had a string of fairly successful records with Fontana records. Our focus today is their sixth single for the label.
"The Letter" is of course The Box Top's track.  I question the wisdom of some A&R man who probably suggested it because their version came out hot on the heels of the original (September 1967).  Guess which charted higher?  Well this version stalled at #42 and was sadly their last 45 that charted at all (they released three more singles on Fontana before chucking it in). It's not bad, it's far poppier than the blue eyed soul delivery by Alex Chilton on the original. I actually prefer The Mindbenders version, probably because I wasn't bludgeoned to death by it on "Oldies radio" my whole life like the original and because it's got these groovy sweeping strings and funky trumpet that all sort of phase together sounding like a kitschy 60's flick.  Of course it's amazing because it was orchestrated by none other than the great man himself John Paul Jones and produced by our resident Mancunian hero Graham Gouldman!  The flipside is where the real gold is!  Penned by Eric Stewart it is by far the trippiest thing the band ever did. It kicks off with some slowly fading in drums with some groovy phlange effects and some psychedelic guitars and apocalyptic lyrics concerning urban sprawl.  There are equally "far out" effects on the vocals and guitars that don't overpower the number in any way. The band's next single would also be produced by Gouldman and feature a controversial track he composed called "Schoolgirl", that concerned the unwanted pregnancy as a result of a smooth talking slippery character.
Both tracks are on pretty much any of the CD comps that join both their material with Wayne Fontana and without him.
Hear "My New Day And Age":
http://www.youtube.com/watch?v=3MRDW9sEBkg 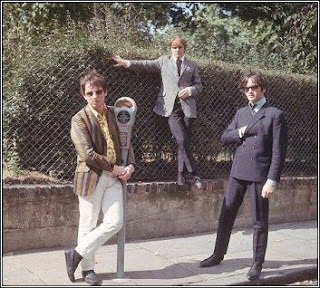