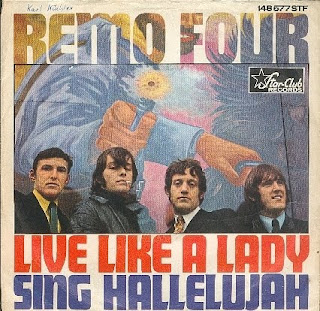 THE REMO FOUR-Live Like A Lady/Sing Hallelujah Germany Star Club 148577STF 1967
I've always had this fascination with the last vestiges of musical eras and the band's that hung tight against the times and still managed to produce some good music as changing times swallowed them up and obliterated their genres.  This scenario is no better exemplified than that of Liverpool in the 60's.  By 1966 Liverpool was commercially a musical no-man's land and though their were still loads of bands who were still getting signed and making great records that sounded nothing like "beat music" ( The Clayton Squares or Wimple Winch to name but a few).  Effectively the days of Scouse band's "making it big" were over, due in no small part to the fickle record consuming public who'd had enough of Liverpool.  A&R men had pillaged the music scene their in '63/'64 and signed everybody and their brother up and took them down to London to record.  Some survived the eventual decline of the beat boom but the cities greatest commercial successes drove the final nail in the coffin with "Revolver" and the dirt was piled six feet above the lid with "Sgt. Pepper".  A few hung on (see my account of The Escorts last 45 in the May 2, 2010) from the "Class of '63/'64" with good results.  As indicated in my previous post Liverpool's Remo Four survived by heading to Germany where they built a comfortable career where they released an LP "Smile" in 1967.
Shortly after the LP they issued their final single in Germany (which had been released in the U.K. the previous year as Fontana TF787).  Discographies claim it was released in 1967 but a scan of the U.K. pressing below shows otherwise: 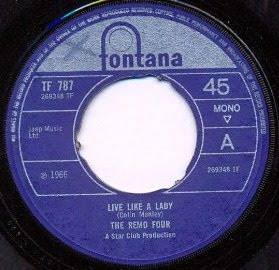 The band's musical output had been entirely cover version's of American artists songs and "Live Like A Lady" marks the first time a band original graced vinyl c/o the pen of guitarist Colin Manley.  It's vastly different than anything the band ever recorded before as it deviates from their usual jazzy r&b/soul vein and veers into total freakbeat turf with some nasally weird lead vocals and a powerful riff that breaks into a proto Crazy World of Arthur Brown organ lick immediately followed by a baroque piano riff before slamming back into the meaty Kinks-style chord bashing that drives the track. These boys were obviously, ahead of their time. The flipside sees the band return to their mod/jazz roots with an interpretation of a number no doubt culled from one of their favorite cover sources: Oscar Brown Jr. with "Sing Hallelujah" .  Whereas Oscar's version is upbeat, The Remo Four turn it into a somber dirge that reminds me of a less heavy moment on the first Deep Purple LP, proving that once again, The Remo Four were ahead of their time.  Sadly this was their last official release, tough the did record the groovily trippy "In The First Place" for the film "Wonderwall", the track itself would go unreleased until the 90's.  Keyboard virtuoso Tony Ashton would join their equally talented drummer Tony Dyke, along with ex-Birds/Creation bassist Kim Gardener as the moderately successful Ashton, Gardener & Dyke in 1968.
Both sides of this single were issued as bonus cuts on the "Smile" CD reissue.  "Live Like A Lady" also appeared on Bam Caruso's Rubble Volume 16 "Glass Orchid Aftermath" while "Sing Hallelujah" cropped up on Volume One of "That Driving Beat".
Hear "Live Like A Lady":
http://www.youtube.com/watch?v=RHgPP5cc12c