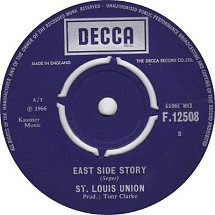 There aren't a lot of U.K. 60's groups who exemplify "mod" in my estimation the way the Manchester's St. Louis Union did. Like my hero's The Action they were fronted by a soulful voiced blond cat. This band's gent in question was named Tony Cassidy. Coming from Manchester and having built a solid reputation playing at that city's fabled mod Mecca The Twisted Wheel, in late '65 they won a Melody Maker sponsored "beat competition" which secured them a deal with Decca.  This lead to their debut crap debut 45 (Decca F 12318 January 1966), a pointless cover of The Fab's "Girl" b/w an even more pointless version of "Respect", which actually reached the lower rungs of the charts (and garnered a U.S release as Parrot 9812).  It's safe to say the band had little choice in the debut 45 material and anybody that cool looking can't be slagged off for doing what some cigar chomping suit at the label who passed on The Beatles said!  Their next 45 was a shade better, the somber Graham Gouldman penned kitchen sink drama called "Behind The Door" backed with a killer Hammond and sax work out called "English Tea" (Decca F 12386 April 1966).   In September 1966 they appeared in all their mod glory (dig lead singer Tony Cassidy's suedehead crop and half the band in Ben Sherman's!) in the ridiculous Spencer Davis Group celluloid vehicle "The Ghost Goes Gear" .  They have two numbers in the film; an unreleased variation of "English Tea" retitled "English Teeth" sans sax but with some tasty fuzz guitar and another equally amazing unreleased vocal number titled (presumably) "I've Got My Pride" delivered in the Georgie Fame via Mose Allison vocal style.

The band had but one single remaining and on October 21, 1966 their third and final single hit the streets.  It's a really odd choice and I'd love to know how the band got a hold of it but the A-side is a full on mod/r&b treatment of the Bob Seger and The Last Heard ( U.S. January 1966 Hideout 1013 ) number "East Side Story".  It's one of those great numbers that tells a story, this time about a down on his luck guy on the wrong side of the tracks who tells his girl that he's decided to take his knife and go out mugging ("those folks uptown got bread to burn, when they see me flash my knife they'll be fearing for their life..."").  Of course he goes out and never comes back ("the night passed like a thousand years the tenement room echoed her tears, then came a knock upon the door two men she'd never seen before, did you know Johnny Brown Miss, we hate to tell you this but has he a relative you know..").  This is without a doubt, powerful stuff and The St. Louis Union's mod Twisted Wheel tour de force Hammond n' horns sound steamrollers through propelled by Tony Cassidy's amazingly soulful voice and some cool Birds-styled twangy distorted guitar near the end. The structure and sheer power of this tune blows me away every time. The flip is a soulful track called "Think About Me", not as powerful as "East Side Story" but every bit as exciting thanks to this solid drumbeat backed by some driving bass/keys/sax.  Sadly this single spelled the end and according to what I've read the band split up by 1967. 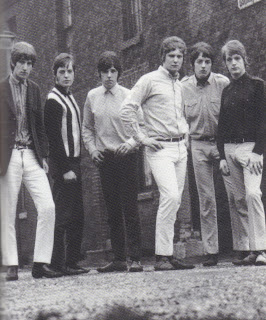 "East Side Story" was reissued on the Deram/Decca "CD "The Mod Scene", "Think About Me" has eluded compilers for now, sadly.  Both tracks surfaced years back on a bootleg LP compilation "Mod Meeting" featuring all the band's tracks one one side and all the recorded output of the equally mod and legendary Richard Kent Style on the other.

Hear "Think About Me":

Love the Ghost Goes Gear clip (never managed to see the film). Tough look to beat that one.