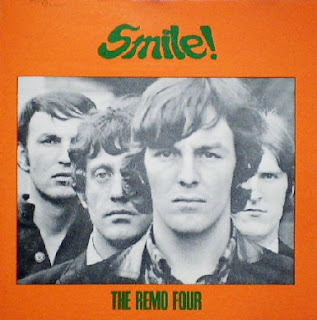 THE REMO FOUR-"Smile" Germany Star Club 158 034 1967
SIDE ONE:
Heart Beat
The Skate
No Money Down
Rock Candy
The 7th Son
SIDE TWO:
Roadrunner
Brother Where Are You?
Jive Samba
Nothin's Too Good For My Baby Baby
Back in the day (mid/late 1980's) my 60's music guru Ron Rimsite used to recommend records to me when I'd swing into the old Venus Records on West 8th Street in NYC where he worked (or as my pal Larry Grogan once observed "from his perch behind the record counter where he'd dispense insults and advice", or something to that affect).  Most of the time I'd adhere when financially possible.  Once he flung an original copy of a German only LP by a Liverpool band I was vaguely familiar with from a Star Club compilation LP (I was quite mad over the "Liverpool beat group" sound in '86) called "Smile" by The Remo Four. "Mod-man" he said in his nasal North Jersey accent, "you need this".  "What's it like?" I said. "Like Georgie Fame but 100 times better and worth more than all of his records.  It's $25, it's like stealing at this price".  For whatever reason I passed, probably because back then I wasn't yet insane enough to spoend that sort of money on records.  Years later I not only sat down and heard it but kicked myself for passing on such a high dollar LP.  Such is the life of a music mod anorak I digress.
The Remo Four would've been just another nameless Liverpool beat group who backed the likes of Johnny Sandon and Tommy Quickly hade they not shuffled a few members and moved to Germany in 1966. They became a hot live commodity there and the un-official houseband for the TV show "Beat Club" (where they can be seen in many episodes).  Most notable of these are them kicking the guts out of The Little Boat Race's "Whatcha Gonna Do About It", smoothly delivering Oscar Brown Jr.'s "But I Was Cool" and doing their stunning, raw version of "Peter Gunn", among others.  With their guitar, bass, organ and drums four piece set up they had, by '66 widely embraced jazz/r&b/soul leaving their "beat group" image in the dust of their back pages (leaning heavily on material by my personal favorite, the late/great Oscar Brown Jr.).  Their records did fairly well in Germany.  They were all pretty much covers and after the 1966 issue of "Peter Gunn"/"Mickey's Monkey" (Star Club 148552 STF) they set about recording their debut German only long player "Smile". The personnel in the band at this time were: Colin Manley-guitar/vocals, Tony Ashton-keyboards/vocals, Phil Rogers-bass and Tony Dyke-drums.
The Remo Four performing "Peter Gunn" live on "Beat Club" 1966

Though it contains no originals the album is one of my favorites, not only because of their arrangements and playing but because of the diversity.  By all accounts I've read in 1967 mod was as good as dead in most of England except the provinces and small hold out scenes like Manchester. It was still swinging on the Continent and the Remo Four's choices of material on the LP shows that they were still flying the flag over in Germany.  Kicking off with a jazzy version of Gloria Jone's "Heartbeat" (from her Tower LP "Come And Go With Me") is no bad way to start and the LP just gets better from there.  The band then offer their take the Dean Parrish track, "The Skate" (with plenty of groovy organ)  before sliding into a version of Chuck Berry's "No Money Down" that's been turned into a blues number with Mose Allison styled-laid back vocals. Jack McDuff's "Rock Candy" is next delivered at a breakneck speed before the Mose Allison tribute continues with a fairly note for note version of "7th Son".
Side Two opens with Junior Walker and The Allstar's "Roadrunner", not much different from the original but with some nifty guitar licks. From the album "...Goes To Washington" comes a soulful reading of Oscar Brown Jr.'s "Brother Where Are You", a creative choice in both material and arrangement. A version of Nat Adderley's "Jive Samba" is next with some very tasty drum work c/o Roy Dyke and is delivered in a Booker T & The M.G.'s style and an amped up, amphetamine driven version of Stevie Wonder's "Nothin's Too Good For My Baby" closes the LP.  It's not terribly soulful, vocal wise but still well done thanks to again, the stellar 4 piece musicianship that carries the whole LP.
The band released one last 45 after the LP in Germany, an original written by Colin Manley called "Live Like A Lady" (more on that one soon) b/w Oscar Brown Jr.'s "Sing Hallelujah" (Star Club 148577STF) , though they later composed/recorded a track, "In The First Place" for the film "Wonderwall".  "Smile" got a CD reissue by the Repertoire label with their two Star Club singles, alternate mixes and an unreleased number as bonus tracks.
Hear "Jive Samba":
http://www.youtube.com/watch?v=K5-Vax2muTI


Hear "Brother Where Are You?":