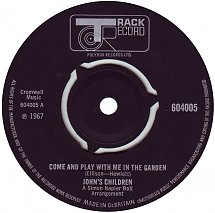 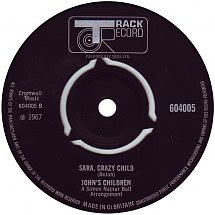 JOHN'S CHILDREN-Come And Play With Me In The Garden/Sarah Crazy Child U.K. Track 604005 1967
Hot on the heels of the mega rare/withdrawn John's Children psychedelic/freakout opus "Midsummer Night's Scene"/"Sarah Crazy Child" (Track 604005 June 1967) came this, their 5th single and their third with guitarist Marc Bolan. Marc had already penned their controversial third single A-side "Desdemona" (Track 604003 May 1967, his debut with them) .  By this point Bolan was sick of manager Simon Napier Bell's publicity stunts and playing in a band who for all intents and purposes were much like a 1967 version of The Sex Pistols: a gimmick designed by a Svengali more interested in headlines and reactions than actual music, so he left. 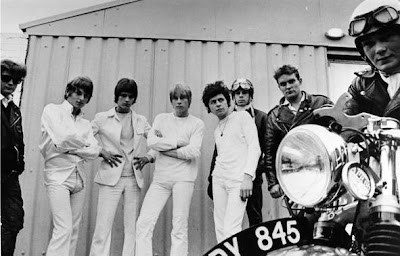 "Mods & Rockers":the band outside their club with some friends, 1967.
"Come And Play With Me In The Garden" is a lyrical rewrite of "Desdemona's" B-Side "Remember Thomas A. Beckett" . The latter was at the time described by a Napier-Bell as being "about a guy who goes funny and starts playing funeral games in his garden").  This time instead of being about an axe wielding murder (who's also in love with his victim's corpses) it's the Summer of Love so the song is, this time around about running around in nature.  It sounds like a lot of flower power schlock, but it's actually quite pleasing to the ears. Simon Napier-Bell, never one to miss a chance for controversy, and being flamboyantly gay and never one to shy away from naked young men had the band get naked for promo photos to launch the 45 with flowers strategically placed to avoid trouble with the Obscenity Squad.  Color versions of this pic were utilized on foreign picture sleeve versions of the single. The flipside was a leftover from the Bolan days, "Sarah Crazy Child" which had previously graced the flip of the withdrawn earlier mentioned 45. It's one of the earliest Bolan tracks that provides a glimpse of what sort of lyrics the world would be in for in his dark, slightly Dylan-esque style. It's a bit odd, but entertaining thanks to the way out lyrics and it's minimal delivery (drums and some out of tune bass and guitar).  On a personal note this was my very first introduction to the band on a budget Polydor compilation LP I purchased in the summer of 1984 called "Medium Rare" (which also afforded my first hearing of The Birds in the form of their "Daddy Daddy").
The single sank without a trace of course.  Both sides are pretty much on any John's Children compilation CD floating around out there.
Hear "Sarah Crazy Child":
http://www.youtube.com/watch?v=M2rRPyN0zG8