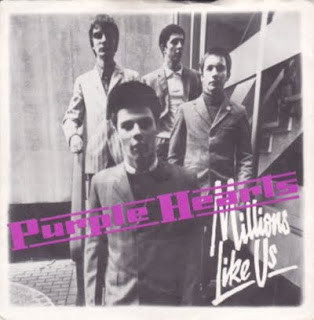 THE PURPLE HEARTS-Millions Like Us/Beat That U.K. Fiction FICS 003 1979
Back in 1981 at the height of my mod mania a friend scored a pile of U.K. "new wave" 45's at a local flea market for .50 a piece.  Among them was the debut single by a U.K.'79 mod band, The Purple Hearts (not to be confused with those Antipodean 60's r&b/freakbeat/mod legends of the same moniker).  Luckily I managed to persuade him to pass it onto me after a good deal of begging, pleading, bribing etc.  Being the lone mod in a small little gang of punks in a rural New Jersey town I took a lot of verbal ribbing from my friends (a nice alternative to the rib kickings we'd often take from the knuckle dragging headbangers or testosterone filled jocks).  One of them derisively referred to the record as "Dozen's Like Us" as his mock ultimate mod putdown and on ocassion took to referring to me as "Shadbolt Stebbing" (two of the band's members last names). 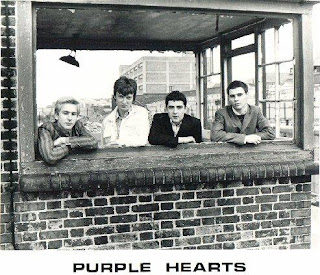 Nearly 30 years later most of the '79 mod bands I listened to in the early 80's provide little more than a nostalgic flash that's usually well and truly over after a playing (or attempting playing) of a 2-3 hour iTunes "'79 mods playlist".  Most of The Purple Hearts '79/'80 material for some reason, still appeals to me (Squire and the odd Chords number too), and none more so than this brilliant debut 45 launched in August 1979 just as the Summer of Mod was in some ways drawing to a close. I think what doomed a vast majority of '79 mod bands was their tendency (intentional or not) to come off like a poor man's Jam.  The Purple Hearts vitality, brutality and angst filled 2-3 minute power pop bursts transcended the usual '79 stuff.  True "Millions Like Us" might sound anthemic in it's title but it's sincere and doesn't get up on it's "mod soapbox" with boasting like "Glory Boys" or any of that.  It was far more appealing to this 14-15 year old's ears and mind and still is:
"I wonder why we got so much to prove,
I wonder why we carry on like we do....."
Or my favorite line, which still holds true today:
"You can live by yourself and bore yourself,
you can survive on anything at all, but unless
you're putting something in you'll get nothing
out you'll never win..."
Of course all of this is delivered over a cacophony of harmonious, powerful '65 Who/'66 Creation styled power chords, rave ups, feedback, slashing guitars and a thumping beat. I don't think there was ever a finer record offered by any British mod scene after the 60's, and probably never will. The best part of it all is the slow boil rave up that starts at about 1:54 into the track that builds to a crescendo of pure mod/power pop mayhem.

The flipside, "Beat That" is equally cool.  A little slower and more chaotic/discordant than the A-side it's still spunky with some searing cynicism from the pen of guys who were probably just out of their late teens and living at home with mom and dad:
"Oh how I wish it hadn't happened,
oh how I wish I hadn't been caught,
there's a mortgage and it's over my
head I've got a wife and two kids to
support.  The divorce came through
the other day..."

The B-side was re-recorded for the band's debut LP "Beat That" where it lost a bit of it's spark. But The Purple Hearts went on to make some more great records, covering , and in turn turning me onto 60's Bowie ("I Can't Help Thinking About Me") and The Equals ("The Guy Who Made Her A Star"). Luckily both sides of the 45 were added as bonus cuts (along w/ the other Purple Heart's Fiction records 45 tracks) for the CD reissue of the "Beat That" album and someone at Rhino records had the forward thinking to include "Millions..." on their power pop compilation "Starry Eyes-UK Pop 2 1977-1979" in their magnificent "D.I.Y" series.

The Purple Hearts in the film "Rough Cut And Ready Dubbed". 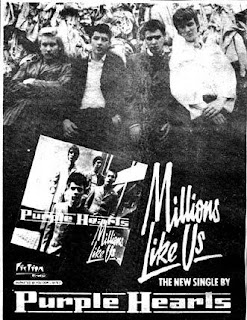 POSTSCRIPT:The latest (September-October 2010) issue of "Shindig!" magazine features a spread on The Purple Hearts. For more info go to:
http://www.shindig-magazine.com/index.html
By Wilthomer - July 07, 2010

A corker of a post, Bill... Oddly, I was just discussing this 45 the other night after I played it at my monthly gig.

Oddly Jon "Mojo" Mills just posted something on F.B. today that the next "Shindig" is going to feature an article on them!