The Scene-Something That You Said: Some Things Age Well 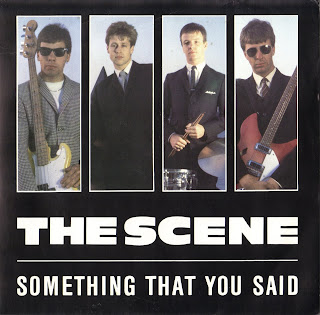 THE SCENE-Something That You Said/Stop-Go U.K. Diamond DIA 003 1984
Those of you that are familiar with this blog will know my feelings on most 70's/80's "mod" records. Without going into one of my rants (which means I'm going to) a lot of it stems from my perception that a great deal of these bands didn't age well for me. Maybe it was the anthemic "youth" message that just lacks substance to a married 43 year old dad, maybe it was that some of them sounded like third rate Jam copyists. Another stumbling block on this genre for me is production and the reliance on the (then) contemporary production and recording effects. There'd be a band who looked mod but had guitars that sounded like U2 or god forbid, had a synthesizer. Now I'm not down on synths, Ultravox's "Vienna" LP is still a fave but I'm a firm believer in the dogma that if you're going to call yourself a mod band then you need a Hammond or some sort of combo organ or something that sounds like one. Enter The Scene. No anthems, no synths, no crappy clothes, no Flock of Seagulls style-production, no tinny/crappy sound and no scent of cash-in.
Flashback to October 1984, I'm in London at The Merc on Carnaby Street.  Though I'm not sure what this had to do with The Merc of today as this one was just a teeny little shop run by a friendly older Asian guy named Jimmy and it was pretty much nothing but records, fanzines, rally patches, badges and t-shirts (no clothes in sight).  On the wall there was this poster of these four sharp looking geezers called The Scene and copies of their single "Something That You Said" hanging everywhere and it looked amazing with four panel pics of each band members and stark minimalistic black and white graphics, serious looking.  I inquired what they were like and a few seconds later Jimmy obliged.  In stunned silence I listened and left the shop with a clutch of other "mod" records, among them six copies of "Something That You Said" for myself and my pals back in the States.  I was in a pub around the corner from Carnaby Street (god what the hell was the name of that place?!) looking over my finds and a few mods were eyeing me. Eventually one of them came over and chatted and then they all did and after numerous insults about my being American they were looking over my purchases and advised me to "bin" all the 45's except The Scene ones and that I should come with them to see The Scene play in a few nights (sadly I was going to be in Wales and missed ever seeing The Scene, but I left the place quite wobbly after my first ever pints of beer in a pub).  Without going into detail about the other records I bought that day let's suffice to say they were all sold eventually on E-bay in the late 90's with the exception of a few Squire singles I snagged and one other, today's entry.

The Scene had grown out of a band called 007 who'd been around since the early 80's .  As The Scene they had previously released an earlier single ("Looking For Love"/"Let Me Know"  Diamond DIA 001) in 1983 and at the time of this single's release their line-up was: Andy Welsh (vocals), Gary Wood (guitar), Russell Wood (bass) and Andy Orr (drums).
"Something That You Said" still sounds as brilliant today as it did to an 18 year old in London in 1984.  I think what grabbed me then and still does is that it has power. It's not tinny sounding.  What I love most about it are the "ba-ba-ba-ba's", they're reminiscent of The Action or any other great 60's band.  The gritty little guitar licks during the break are nifty and the whole thing is pretty damn forceful.  I think what appeals to me is it's firmly 60's influenced but it's still original in the fact that it's not a case of "let's get some crappy vintage Vox gear and make a shitty garage record".
The flip "Stop Go" was recorded live in Belfast (or so the sleeve claims) and shows the same vitality as the A-side and the band's Rickenbacker 330 firmly jangles through.  In fact it reminds me of The Plimsouls if they were British (and better dressers).  I seem to recall reading stories in the mod fanzine press back in the day that the band did an Irish tour where they allegedly spent all their cash early into it on booze.  I'm wondering if this was recorded on the same tour, if it's in fact true. Either way it's a great story and makes me wish I'd had the chance to meet these guys and hear them play.
Through FaceBook I've become acquainted with their guitarist Gary Wood who informs me that The Scene have reformed and are doing a bit of gigging in the U.K.  I've also recently discovered that all of their material (their three singles plus various tracks from compilation albums) is available on CD from Detour records along with recordings the band made prior when they were called 007.
Check out The Scene's MySpace page:
http://www.myspace.com/007thescene 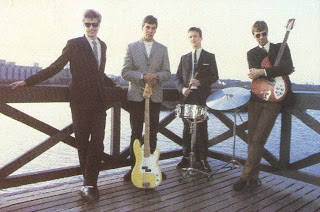 Email ThisBlogThis!Share to TwitterShare to FacebookShare to Pinterest
Labels: 80s mod The scene

That pub on Carnaby Street was the Shakespeares Head, wasn't it?

Phew, that was a LONG time ago for me to recall correctly. I think I've got a pic of it someplace I'll have to dig it up.

We could have been in The Merc together that very day buying that single!

Heard it at a party about six months ago and was surprised by how good it sounded. Saw them plenty of times around then (mainly at the 100 Club) and they were good - smashed guitars up which always went down well in my 16/17 year old eyes. They used to do a song called "Is She In Love With Love" which never came out at the time but I can sing. Might be on that LP you mention (and will prob sound terrible and ruin my memories - which is why I didn't go to their reunion gig).

The Shakespeare's Head is still on Carnaby St.

Bill, I seriously need to spend a free day and read through your entire blog because you have a lot of great articles.

I haven't finished reading this one yet, but this line is exactly why I lost interest in revival bands pretty early on:
"Maybe it was the anthemic "youth" message that just lacks substance to a married 43 year old dad, maybe it was that some of them sounded like third rate Jam copyists."

I think youll find that the scenes first single Looking for love and Let me know,had vovals by Mick Winslow and not Andy Welsch...So a heads up to get the facts straight.

Spot on Mate! I was not a mod, but liked this band. I bought this 7"in 1985 and took it with me back home to Seattle to play on KCMU (later KEXP) 90.3 FM where I was a (late night)DJ in my (not to) spare time. It is still in my collection (as of 2019). I knew Seattle (so called) Mod bands like The Fall-Outs, The Saturday Boy and others whose names now elude me. I continued my pursuit of other bands in this vein over the years. I saw a few good ones, but mostly crappola. I agree with much of your revivalist sentiments. I tend to favor the original deal. It is good that there are folks like you still out there.